The store will not work correctly in the case when cookies are disabled.
The Traditional Gongfu Tea Ceremony: A Complete Guide 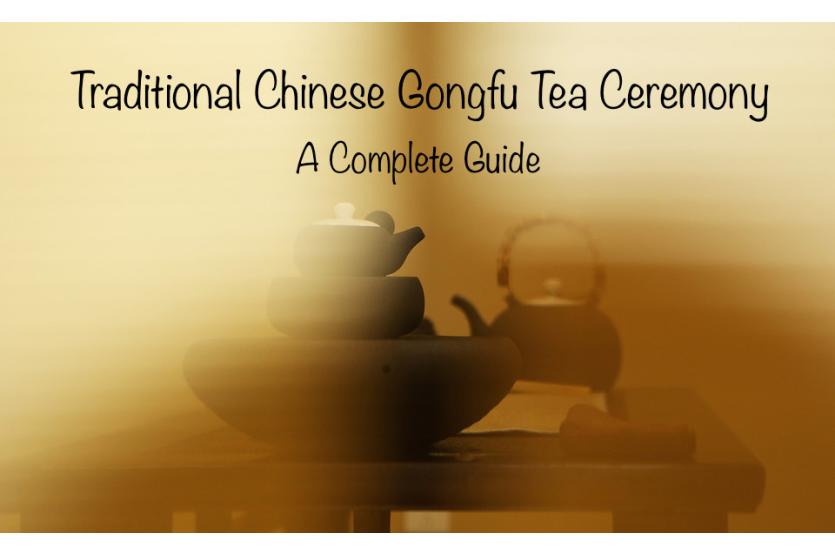 Gongfu tea is a traditional way of preparing tea, characterised by multiple infusions of the same tea in a small teapot. This way of brewing is originated from Chaozhou during the Song Dynasty, which is why it’s also often referred to as ‘Chaozhou Gongfu Cha’.

There’s a Chinese saying “有潮汕人的地方，便有功夫茶的影子,” which literally means “In places where Chaozhou people are, you’ll find a reflection of gongfu tea”. This saying more than reflects reality as the custom of preparing gongfu tea is still maintained. Even today, every family in Chaozhou still has a tea table with a traditional tea set for gongfu brewing.

In this article we mainly discuss the principles of traditional Chinese gongfu brewing. Though there are differences in application when compared with a Japanese, Vietnamese or Korean tea ceremony, many principles still remain the same.

‘Gongfu’ literally means ‘Kung Fu’ in Chinese. When hearing this term, people tend to wonder why brewing tea is related to martial arts. However, the word kung fu means more than just a fighting sport. The most basic meaning of the term is related to the words ‘art’, ‘skill’ and ‘effort’. So in the context of tea preparation, it means brews tea with more effort and dedication to brew a perfect cup of tea in a more artistic way. This also extends to the art of tasting tea, which also requires ‘skill’.

Gongfu Tea as a Type of Culture and Lifestyle

Some people think Gongfu tea is a type of tea. That’s not true. Instead, it’s a way of brewing tea. Because of the artistic side of such steeping method, it can also be considered a kind of tea culture. Especially, during ancient times, people practice gongfu tea to self-cultivate.

Like Kung Fu as a type of Martial Arts, gongfu tea also focuses on the spirit and ideology behind it, which is how to become a better moral-person. This can be reached consciousness in movement and focusing oneself only on the brewing of tea. The real essence of this is to become aware of the ‘cha qi’ (tea energy), so that tea is experienced beyond just taste, aroma, and appearance, but also how it affects one’s body and mind.

What Teas Are Suitable For Gongfu Brewing?

In practice, mostly oolong, pu erh and certain black teas often prepared in the gongfu way in China. The reason is because these teas simply taste better in such a way. This doesn’t mean that other teas can’t be brewed with this method. As said, gongfu tea extends beyond tea tasting. It’s also about performing art and connecting with ones body and mind. As more and more people can afford good tea today, the art of steeping tea is flourishing and there’s a lot of experimentation and development going on with brewing green and white tea in such a way.

A full Chinese tea ceremony set will consists out the following accessories:

The below videos should be a proper guide to brewing gongfu tea yourself. For super serious brewers, read this post about the traditional 21-step gongfu brewing method.

Using teapots to brew tea is considered the most traditional way of preparing tea. This is also preferred by people in Chaozhou where gongfu tea originates from. The teapot should be made from a type of ceramic, ideally from Yixing clay. Yixing teapots have many benefits as they’re known to improve taste and isolate heat well. Such teapots are usually smaller than usual teapots and steep 4-6 small cups of tea that can be consumed in one sip.

One disadvantage of Yixing teapots is that one should dedicate it to one specific type of tea. If you want to avoid buying multiple teapots for different types of tea, then it's better to go for a porcelain teapot.

Also read: 2 ways to pour with an Yixing teapot

See the video below in which we demonstrate how we brew Tieguanyin oolong tea with an Yixing teapot:

Another popular way of brewing gongfu tea is using gaiwans. These steeping vessels consists of a 3 parts (cup, lid and coaster) and are mostly made from porcelain. Though they’re mainly used to steep tea, most people would gaiwans are tea cups to drink from. Gaiwans don’t isolate as well as Yixing teapots, but they’re much better for appreciating the appearance of tea. Porcelain gaiwans also don’t affect the flavour of tea, which can be an advantage, especially for green teas with subtle flavour.

Watch the video below in which we brew a Huang Shan Mao Feng in a gaiwan:

When it's your first time using a gaiwan, it's sometimes challenging not to burn your hands. In such case, read our tips in this post: Gaiwan Brewing & How Not To Burn Your Hands

Brewing tea in a straight glass is usually considered as a casual way of brewing. When visiting green tea producing regions like the West Lake region in Hangzhou, you’ll see many people drink tea just from a glass. The leaves often aren’t separated from the infusion after the steeping is finished. This is because, one simply adds more water when the flavour becomes too strong. A common rule is also to not completely finish the glass, but refill with hot water when 1/3 of tea is left. See how this works in the video below:

You can tweak the brewing method based on the specific characteristics of the tea that you're planning to brew. See the video below:

Glasses aren’t great for isolating heat, which is why they’re mainly used to for steeping green tea and other delicate teas that don’t require high temperature. One benefit is that once the water temperature drops, the leaves in the glass will stop releasing flavour until you refill with hot water. Other benefits include that you don’t need many tools to perform the ceremony and transparent glasses are the best way to appreciate the appearance of leaves.

Such way of brewing (not separating leaves from tea) is also often applied using a travel tumbler. It’s mainly popular among older generation, which is why it’s also called ‘grandpa style brewing’.

January 4, 2017
Comments
Madison
In the article you state that tea should first be poured into the pitcher before it can be served into the cups. Why's that?
Reply
Teasenz
The brewing time in gongfu teapots is very short. Sometimes just a few seconds. Therefore, if you pour the tea directly from the teapot into the cups, the first cup will take different then the last cup. This is because the tea in the last cup has stayed longer in the teapot. To make sure each and every cup tastes the same, the tea is first poured all together in the pitcher.
Reply
Search The Blog
Categories
Recent Posts
Tags
Anhua dark tea Black tea Chrysanthemum tea Dan cong tea Free tea giveaways Gaiwan Green tea Kombucha Liu bao tea Oolong tea Osmanthus Pu erh tea Tea history Tea recipe Tea sayings Tea storage Tea stories Tea taste White tea Wuyishan Yixing teapots
Search The Blog