The store will not work correctly in the case when cookies are disabled.
The Chinese Wedding Tea Ceremony Guide 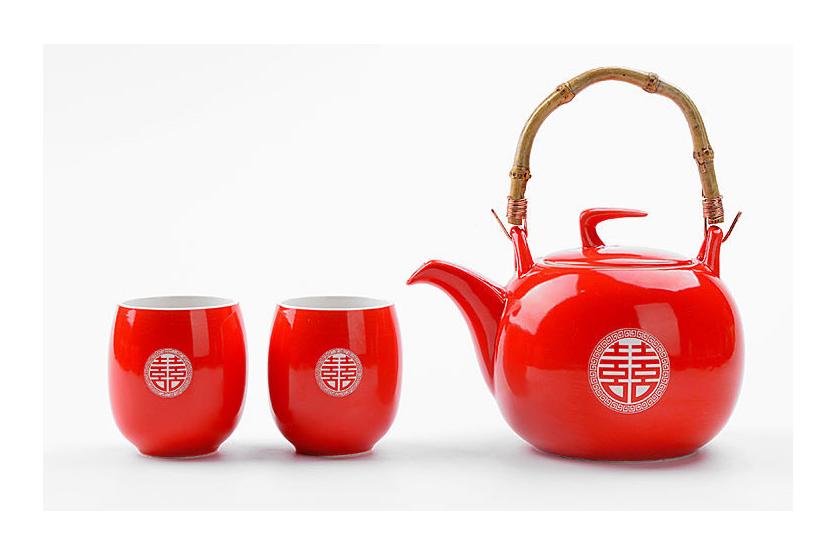 Given that tea is an important part of Chinese culture, it's not surprising that tea part of a traditional Chinese wedding. Both bride and groom are expected to serve tea in a gaiwan to both sides of the parents, representing an important moment in which members of both families become relatives of each other. On this page, we've documented all the information you need to know to get ready for your wedding, or organize a Chinese wedding tea ceremony for someone close to you.

Tea can be served using a gaiwan or teapot. See this video in which we show how you can brew a Chinese black tea in a gaiwan and serve during a ceremony. The video also includes tips on how one should serve the tea to relatives as well as how they should receive and drink the tea.

For more information on suitable teas, ceremony steps, and teaware, please read the paragraphs further in this guide.

In a traditional Chinese wedding, the tea ceremony is one of the most significant events. It includes very formal introductions of the bride and groom and shows respect to their families. The earliest written record of tea ceremonies emerged during the Tang Dynasty over 1200 years ago. It was initially called cha dao (茶道）or the way of tea. Some Japanese monks travelled to China and brought it back to Japan. Influenced by Japanese culture, the tea ceremony became more grave and formal.

In the very first documented versions of such ceremony, the couple would serve tea to the groom's family after exchanging vows. Then bride would have served tea privately to her own family that morning. However, such practice is rare today, and is only applied by very conservative families.

Today, many couples choose to show respect to both the bride and groom's families by hosting tea ceremonies for both sides.

The meaning of a Chinese wedding tea ceremony

In China, serving tea when guests come is a very traditional propriety. It is a significant way to show respects. In a wedding, such an act is to show respect and gratitude to parents for all the years of love and care.

A tea ceremony also meaningful in many other ways. It's a symbol of purity, stability and fertility. The purity of tea signifies the love is pure and noble; the stability of tea stands for faithful love; the fertility of tea means that the new couple will have many children.

We hope the above script helps. If you're questions, always feel free to ask in the comment section below.

After the drinking of the tea, the following procedure is that gifts for the bride and groom will be presented. If it's your first time attending such a ceremony, you might be worried about what Chinese wedding tea ceremony gifts are suitable. Well you really don't have to, since gifts are usually in forms of red envelopes with money that can widely ranges from 50 to 500 USD. These red envelopes are also called 'lai see' in Hong Kong and the Guangdong province, while in other areas in China they're know as 'hong bao'.

The traditional envelopes are made from paper/carton. 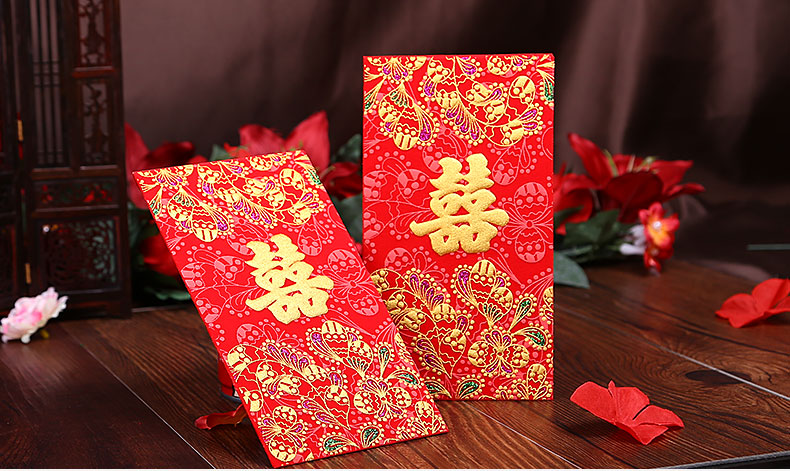 Nowadays, more and more creatively designed hong bao are available and people tend to experiment with other materials such as fabrics. 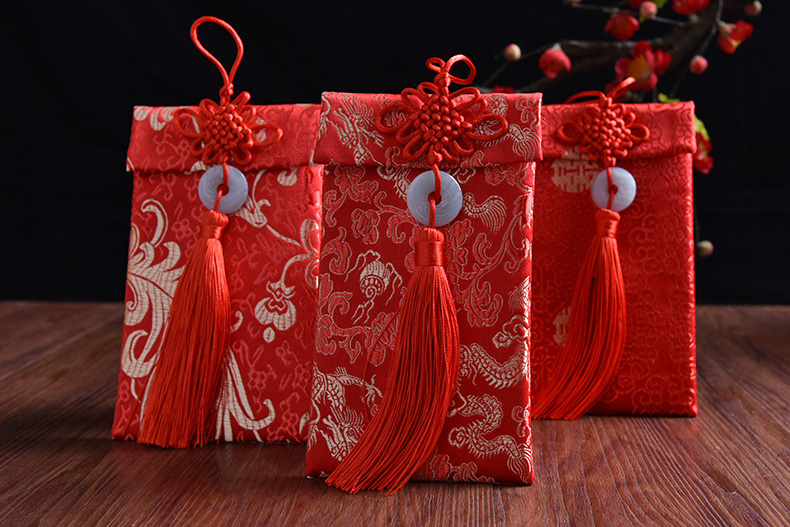 How much money to put in a red envelop?

It's very hard to give you an indication of what amount is suitable as it really depends on the family situation and traditional practice. This vary widely across families and different regions in China. If you're not sure, you should ask someone in the family first. It's better to be embarrassed asking, then feeling embarrassed when giving a too low amount.

Where to get red envelops?

If you don't have any red envelops available, don't start looking into buying some yet. Usually they're sold in 50 pieces and above per pack, so most of them will remain unused. Instead, as around if there are friends or relatives that have some spare ones. Most likely they do. If you are planning to buy, luckily most red envelops on the market can be used in any occasion. Though, it's good to know that some red envelopes are targeted towards specific events such as child birth or new year. Read the descriptions carefully or check with the seller directly to avoid those. It's easy to find envelop sellers online or look for shops in a nearby China town.

Parents, grandparents and some closely related relatives sometimes also present jewellery as a gift. It's good to know that, the couple should wear the jewellery immediately as a sign of appreciation.

To the younger siblings and cousins who help them serve tea will be blessed with a happy marriage or abundant wealth. These 'helpers' also receive lucky red envelopes filled with money.

What kind of Chinese tea is suitable?

There's no such thing as the best tea for a wedding. Choosing a tea is personal, like choosing your wedding dress and venue. It's believed to bring happiness to the couple and to foster good relations between the newlyweds and her new in-laws. You can use black tea for simplicity sake, but to personalize your tea choice we recommend to discuss this in the family.

It's often also a great idea to ask the parents and perhaps some other family members what their favorite teas are. After all, a ceremony is all about honoring parents and relatives. It would be really thoughtful if you could arrange to serve the tea they love. It's a wonderful thing if you can make your ceremony personal. If they do have a preference for a certain tea, go for the best grade you can get. Since you don't need that many grams, it's not gonna cost you a fortune, even if it's an expensive tea.

Some of you have asked about the use of other ingredients such as red dates, peanuts, longans and lotus seeds. While these could be used to make a sweet soup (served in bowls) for both the bride and groom, they normally aren't added to the tea for parents and family members. The reason that they're meant for the bride and groom is because they symbolize fertility, allowing the couple to have children quickly :) 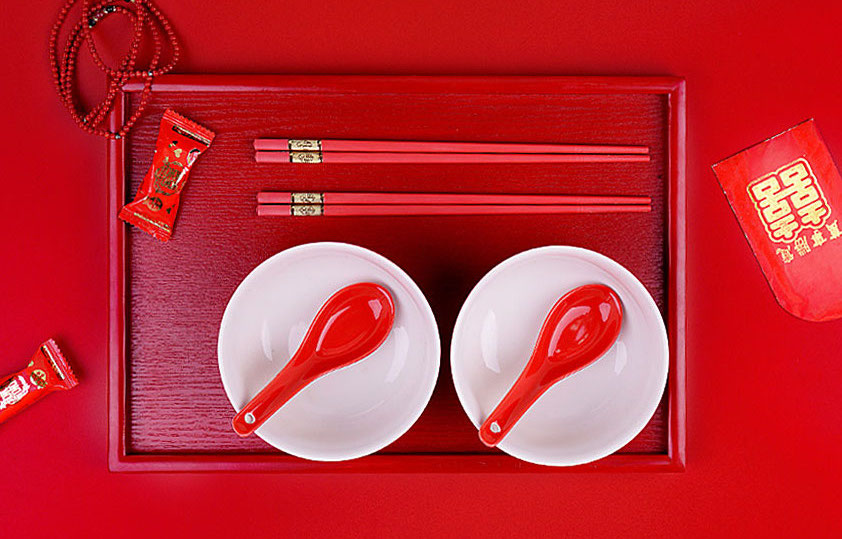 An interesting fact: when you read the Chinese characters of the for above mentioned ingredients in the right order (dates, peanuts, longans, lotus seeds) it sounds like "to have baby as soon as possible".

Note: when using red dates, they shouldn't be pealed or cut in slices. They've to be kept as a whole to represent fertility. (We would like to talk Grace Zhang for her sharing this comment with us.)

What Chinese Teaware to Use?

Please visit our WEDDING TEA SETS page to see what teaware we offer for your Chinese wedding. 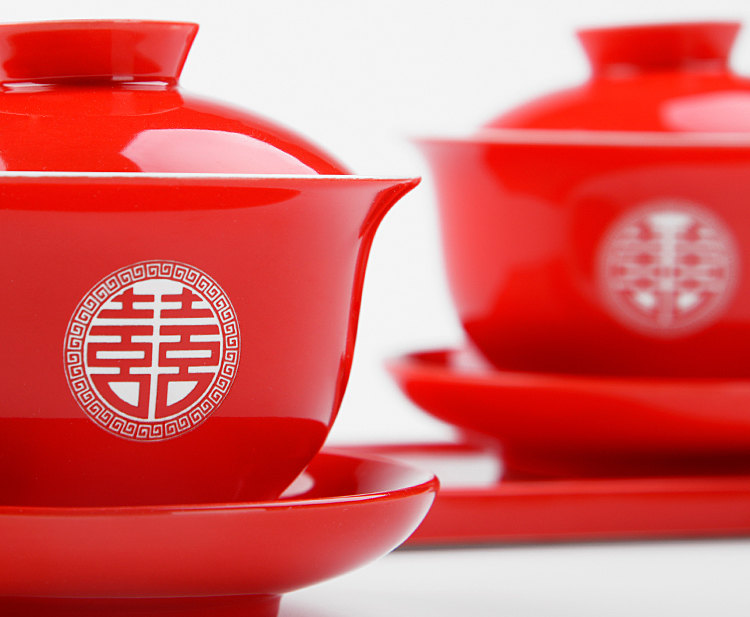 The best teaware to serve tea in is to either use a traditional Chinese gaiwan or a teapot set with matching cups. This is basically a cup that comes with a lid and saucer. A few things that are important:

Tip: the Chinese wedding tea set is a meaningful keepsake of the wedding and an important gift from the bride’s family. It can be a family heirloom as well. In the future when the couples’ children get married, the tea set will be used and presented. Given this, it might be great to ask the parents first, if they have a suitable antique gaiwan before considering buying a new one.

Alternative: Use A Teapot Ceremony Set

Besides gaiwans, It's also common these days to prepare tea in a teapot and serve in cups. Some will keep it as simple as a teapot with a few cups. Others prepare it as traditional as possible and add storage jars, pitchers, filters, tea trays to the decor. Teasenz offers a complete wedding set that includes a teapot, storage jar, tray and 4 matching cups.

Note: if you're looking for teaware and other accessories for your Chinese tea ceremony, but you can't find it on our site. Feel free to contact us, so we can help you source a perfect set. Simply send an email to [email protected] and let us know what products you're looking for. Also let us know your address details so we can also quote you an affordable shipping fee

In a Chinese wedding tea ceremony, a suitable dress is necessary. Bride and groom need to dress in red silk and the tulle veil should be red too. Tang suit and Hanfu (Most famous traditional costumes in China and known to the world) are most popular. Some popular design such as dragons and phoenix on the dress would be suitable for decoration.

To decorate the room for the Chinese wedding tea ceremony is also a good choice. Gold and red colours ‘Double Happiness’ symbol, Chinese marriage gods, phoenix and dragon motifs and decorative strands of firecrackers are all suitable for the ceremony.

If you do plan to invite all your guests to the tea ceremony, don’t forget to invite a host who can explain the significance behind the ceremony to those unfamiliar with the tradition.