The store will not work correctly in the case when cookies are disabled.
How to Use a Gaiwan without Burning your Hands
Gaiwan
Posted in: How To Make Chinese Tea, Tea Videos
1 comment

How to Use a Gaiwan without Burning your Hands

A gaiwan is a bowl or cup used for infusion of tea leaves and/or tea consumption. It's originated from the Ming Dynasty and consists of a cup, lid and saucer.

Chinese gaiwans are great tools for tea appreciation, but using it can be challenging in the beginning. By watching the video below you can learn all the tips and tricks to get you started. You'll learn the official way to hold the gaiwan and avoid burning your hands while pouring tea. For more details, we also recommend to read our notes on using a gaiwan below the video.

Video about using a gaiwan

If this video doesn't display well, then watch it directly on Youtube by clicking the following link: How to Use a Gaiwan

Further Notes on How to use a Gaiwan 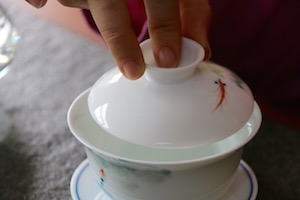 Burning one's hands when using a gaiwan is something that any tea lover will have to go through. Eventually it will pay off as these Chinese cups are great for tea appreciation. This section discusses the content that's displayed in the video above with some added details:

When raising the lid, you can hold the sides of the knob with your thumb and middle finger, while your index finger on the top. The best practice would be to avoid touching the surface of the lid, as it can become hot when there's tea inside the gaiwan. 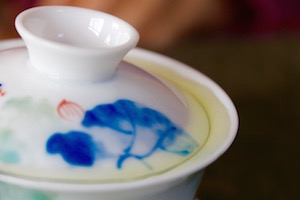 Ideally you put the lid one side of the lid on the saucer to avoid it absorbing any smell of the table.

After adding the right amount of leaves, you can pour hot water inside the cup in circular motion along the edges. This will allow the heat to spread more evenly inside the cup for a better infusion. Then close the gaiwan.

When you see tea on the lid, this means you've poured to much water in the gaiwan. You want to avoid such situation, because this could result in the edges of the gaiwan becoming hot, which is one of the main reasons why you could burn your hands. 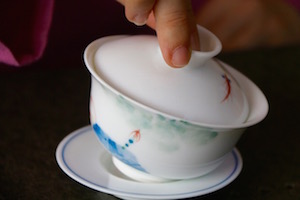 If this happens, you can easily fix it by pressing tightly on the knob of the lid and steer the gaiwan to one side (or use circular motions as in the video above) to discard a bit of tea.

When the tea is ready you can either directly drink from it or pour it into a fairness cup/pitcher.

If you want to drink from the gaiwan. You can hold the saucer instead of the cup itself (as the cup will be pretty hot). 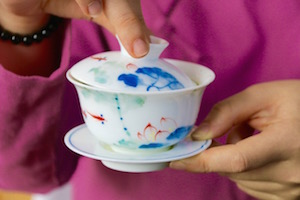 Allow a small opening between the lid and the cup, and drink from it while you hold the knob. Keeping the lid on the cup will avoid the steam in the cup ending up on your face, unless you think it's a nice tea facial ;)

Your tea will taste better, and not change in taste due to the leaves continuously releasing flavor, when you pour it into a fairness pitcher first. Read more about this in the next section.

Pouring with a gaiwan

Pouring tea from a gaiwan is the most challenging part. Nudge the lid to the side to allow a small opening between the lid and the gaiwan.

This space should be large enough to properly let the tea flow out, but small enough to keep the leaves inside. This will also avoid the hot steam coming out from the back side of the gaiwan that could burn your hands.

Then hold the edges of the cup with your middle finger and thumb, and press tightly on the knob of the lid with your index finger for a tight grip. Now raise and pour.

Don't let the gaiwan pass a 90 degrees angle. This will only slow down the pouring and the water may flow out from the left and right side of the lid and burn your hands. 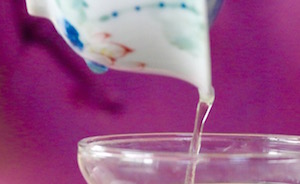 Pouring tea from a pitcher into several cups will make sure the tea taste the same in each cup. The reason is that leaves continuously release flavor inside the gaiwan. So when pouring directly into cups, the first cup of tea will taste milder than the last cup.