The store will not work correctly in the case when cookies are disabled.
White Tea vs Green Tea: Everything You Need To Know 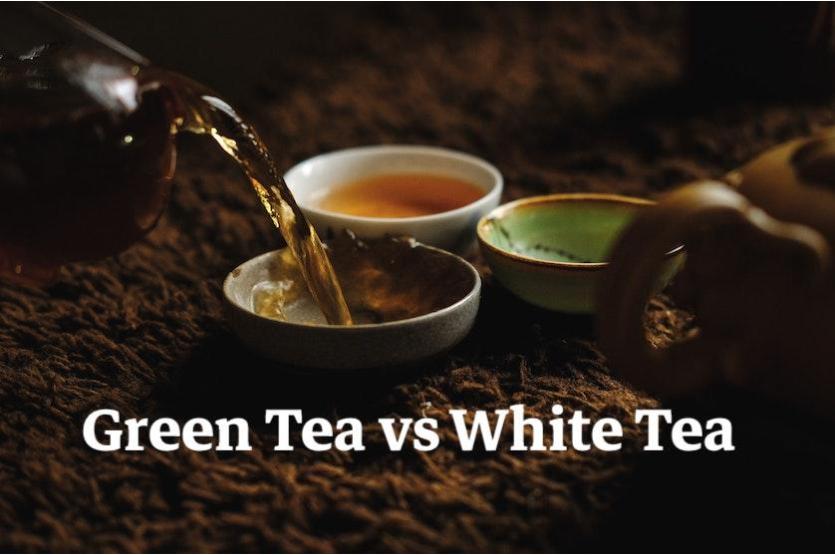 White Tea vs Green Tea: Everything You Need To Know

Green tea is well-known for its numerous health benefits, including weight loss effects. However, in the recent years, white tea is gaining popularity. This closely related tea type is in fact made from the same Camellia Sinenes tea plant. So what is really the difference between white and green tea? In this article, we compare both types and discuss their differences in processing, caffeine content, health benefits, price and more.

The understanding of processing is very important when it comes to comparing tea types. This aspect greatly influences the resulting caffeine content as well as the health benefits.

You should first know that all teas are processed from different cultivars of the Camellia sinenses tea plant. So the classification of tea has in fact nothing to do with the raw material used1. What makes the difference is the processing method that is applied.

Unlike black tea, both white and green tea are lightly processed tea. One important factor is how leaves are dried.

The main difference between white tea versus green teas processing is that white tea is first sun-dried, while green tea is dried in the shade.

White tea's processing steps can be summarized as simple as withering under direct sun light and followed by further indoor withering. The leaves aren't rolled, squeezed, pan-fried, or roasted as is the case for other tea types. The result of such minimal processing is that the tea keeps it whitish color, especially when the tea consists of buds (as you can see in the picture above). The white color is the results of downy hairs on the surface of the buds.

In contrast, you won't see this with green teas. Here's why:

The downy hairs on green tea leaves will disappear after they're pan-fried.

You can see how green teas are pan-fried below:

Many believe that white tea processing is very easy because it only involves withering, but it isn't. First of all tea leaves have to be spread evenly on bamboo sheets for drying in the sun right after picking. This has to be done as soon as possible after picking, to make sure they don't turn brown. Indoor withering is even more difficult, as one needs to control humidity, room temperature, and monitor the fermentation of the leaves carefully to determine the right duration.

Green teas are often described with notes such as: vegetal, seaweed, fresh grass, and nuts. White teas can be vegetal too, but too a much lesser extend due to stronger sun-drying. So they may be vegetal, but it won't go as far as tasting like fresh grass. Floral and fruity flowers are also more common in white teas.

White tea and green tea can be prepared in similar ways because they both belong to the 'delicate' kind of teas. Moreover, they're both less oxidized teas compared to for example black tea. We recommend the following brewing parameters:

Tea processing isn't something you learn over night. In China, production skills are passed on generation after generation. That's why white and green teas are produced in different specialized regions. Green tea regions include the West Lake region south of Hangzhou and the Yellow Mountain (also known as Huangshan).

On the other hand, China's Fujian province is very skilled in processing white tea. Great white tea comes from villages such as Fuding and Zhenghe. Famous white teas from these regions include the silver needle and bai mu dan.

Both white and green tea prices can range from very cheap to very expensive. There's simply no way to give it a standard price tag. Tea prices can fluctuate every year and depend mainly on the success of a harvest. If climate conditions are ideal, this can result in more supply to cover the consumer demand. In such cases, the prices in that year will be lower. However, tea from original regions are often times more expensive, than villages with less history.

It's generally believed that white tea contains less caffeine than green tea. While this generally might be true, it only explain a small part of the story.

For caffeine content, one also need to look at other factors. For instance, teas with more young bud content contain often more caffeine. Steeping temperature and steeping time also matter. The longer you steep and the higher the temperature you apply, the more caffeine you're going to extract.

Generalizing caffeine levels based on tea types is a bad idea. According to a study published in Journal of Food Science (2005) caffeine content can vary widely among individual teas. The researchers tested 77 teas and found very broad ranges of caffeine levels. What was remarkable that a white tea in the study in fact had the highest level! So it's completely wrong to drink white tea based on the believe that it contains less caffeine than other types.

Another study in 2008 (Journal of Analytical Toxicology) also studied multiple teas and found that the caffeine levels range from 14-61 mg per 6-8 oz serving. The scientists found no observable difference of caffeine content among tea types.

Read more about caffeine in our tea caffeine guide.

White versus Green Tea Side Effects

Both white and green tea contain caffeine and therefore it should be avoided by those who're sensitive to it. To avoid the side effects, it's recommended to drink tea in the morning and afternoon and avoid it during the evening. Instead, in the evening you could go for caffeine free herbal or flower teas.

Besides side effects related to caffeine, both white and green tea are fairly 'raw' teas due to their mild processing. Because of this it can sometimes upset the stomach. It's the best to completely avoid tea on an empty stomach. Ideally, drink tea 30 minutes after eating a meal to avoid such side effects.

Alternatives that are better for the stomach

If your stomach still doesn't feel well after drinking white or green tea. We recommend to try the following alternatives:

Also read our guide about when to drink tea.

EGCG is the most abundant catechin in tea and is a potent antioxidant that has therapeutic applications in the treatment of many disorders (e.g. cancer). EGCG is found in green tea and that is why it has numerous benefits including promoting properties including boosting cardiovascular health, helping to lower cholesterol, reducing the risk of cancer and enhancing weight loss.

So what about white tea? Some people believe that white tea contains more EGCG as it's less intensively processed as green or black tea. However, a 2010 study in the Journal of Food Science shows that it's hard to generalise catechin content by tea type. The researchers found that total catechin content for different white teas in dry form can range from 14.40 to 369.60 mg/g compared to 21.38 to 228.20 mg/g for dry green tea. These numbers suggest that there's a great variety in catechin levels within each tea type.

The authors of the research paper conclude that processing, cultivation and the source itself may influence tea catechin content more than whether it's a white or green tea.

Because tea types aren't relevant for EGCG catechin levels, we suggest to focus on sourcing high quality tea. Teas with more full leaves and buds generally contain more catechin. In addition, freshness is a very important factor. Often times, tea bags contains 'tea dust' that are shipped in large containers. Before it ends up in your cup, it's already 4-6 months old. At Teasenz, we therefore spend a lot of time to source the tea leaves fresh from origin, which are then directly packed in sealed aluminium bags that protect the leaves from deterioration.

Read also more about tea storage in this article: How to store loose tea properly.

Drinking tea as part of a healthy weight loss diet is an excellent choice. It contains very low calories, especially when you don't add sugar and/or milk. In addition, the caffeine boost energy expenditure levels during the day, while the polyphenols in tea boost fat reduction.

However, while many studies are performed on white and green tea separately, there's no reliable study out there that compares both teas on their weight loss effects. It's said that white tea contains more polyphenols because it's not as heavily processed as black tea, and not pan-fried like green tea. However, in the end, the differences are small. After all, all leaf teas are made from the same Camellia sinenses tea plant.

Find a Tea You Love

If you drink tea to loose weight, you're in for the long-game. It's not a miracle drink that can shed weight quickly in a few days. Instead, it's a very low calorie and nutritious drink that can manage long-term health. If you make tea part of your daily diet, it will help you maintain a healthy body weight. The key to success isn't about choosing white or green tea, but it's about discovering tea and determining which individual tea you'll love for its taste and flavor. Only after you truly embrace the tea, you can sustainably drink it for the long-term and the results will come.

Questions? Feel free to ask them in the comment section below and we'll answer your question within 24 hours!

May 7, 2022
Comments
Michelle J.
Great article! I'm a newbie to tea. I always thought each tea type was made from a different plant. Good to know that it's in fact the same plant. I'll follow your advice and drink the tea that I simply love. For weight loss, are tea powders more effective?
Reply
Teasenz
Good to know this was useful to you. I highly advise not to try tea powders. Tea powders are marketed as weight loss miracle products. But tea in high concentrated powder can seriously mess up ones stomach. Powder sellers might tell you that this is the proof that the powder works, but it's really unhealthy. Most people see that they lose weight in the beginning due to loss of liquid, but the weight will come back the moment you stop using the powder.
Reply
TJ
What about iced tea? Do the same benefits apply?
Reply
Teasenz
When you steep the tea and then let it cool down and serve it iced, you'll enjoy similar benefits. However, you shouldn't add any sugar to it. Because the tea is consumed cold, it also won't have the digestive benefits, as cold drinks aren't as good for the stomach. Other benefits do apply.
Reply
R Perkins
This is an interesting article, but loses credibility due to the typos! Also, when using scientific nomenclature, genus (Camellia) is capitalised, wheras species (sinenses) is not. ....Camellia sinenses....???? Same across the plant and animal kingdoms. ????
Reply
Teasenz
Hi Robin, we're sorry for the typos. It's a rather old article written in by a tea sommelier who's English wasn't great. We've updated the article!
Reply
R van der
Great article and site. I'm not to knowledgeble on teas but I drink 1 green and 1 white tea a day. I love them both and can't choose so I do it like this.
Reply
Scott p
Two things. Green tea on an empty stomach makes my stomach quest. Any insight on that. Also curious if the further processing of green vs white isn't actually a plus green similar to lycene absorption between whole tomatoes and cooked with the latter having more bioavailable lycene than the former?
Reply
Search The Blog
Categories
Recent Posts
Tags
Anhua dark tea Black tea Chrysanthemum tea Dan cong tea Free tea giveaways Gaiwan Green tea Kombucha Liu bao tea Oolong tea Osmanthus Pu erh tea Tea history Tea recipe Tea sayings Tea storage Tea stories Tea taste White tea Wuyishan Yixing teapots
Search The Blog