The store will not work correctly in the case when cookies are disabled.
Tea Caffeine Guide
Posted in: Chinese Tea Side Effects, Chinese Tea Health Benefits
10 comments

Caffeine is found in a variety of food and drinks. Some of the most common and popular examples are tea, coffee and chocolate. While the average cup of coffee contains approximately 80 – 185 mg of caffeine per cup, while tea averages closer to 15 – 70 mg. In contrast, most herbal teas and flower teas contains no caffeine at all.

This article examines the factors involved in caffeine levels, as well as the positive and negative effects of consuming caffeinated beverages. So does tea contain caffeine? Yes, it does. Now let's discuss the details.

What Is Caffeine and How Does it Work? 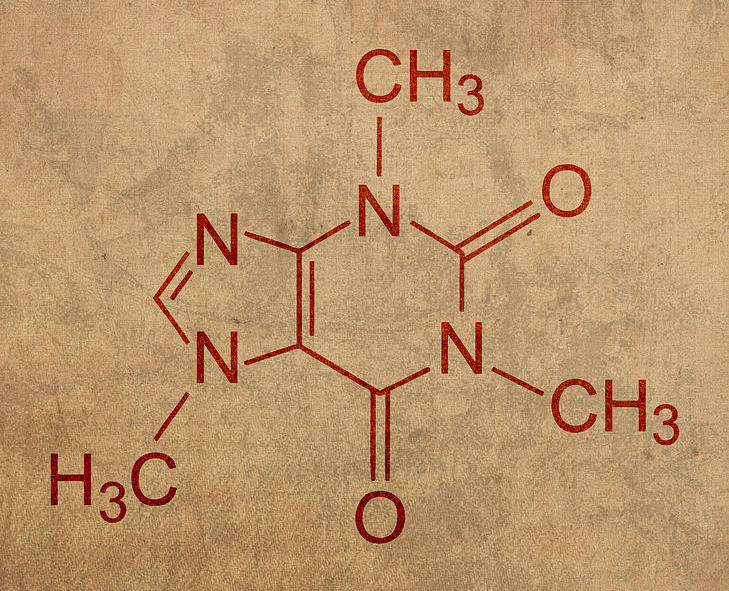 Caffeine is a naturally-occurring stimulant, though sometimes it is added to things like soda pop and energy drinks. Its technical name is “trimethylxanthine”. As many people are aware, it is known to be an addictive substance.

In addition, caffeine increases the levels of dopamine in our bodies, which gives a sense of happiness and pleasure.

Different people will have diverse tolerance levels, but in most cases it is not recommended to consume more than 300 mg of caffeine per day. This is equal to about 2-3 cups of coffee or 4-10 cups of tea (depending on the type of tea/coffee).

There are two main factors relating to how much tea caffeine is in a cup of tea – the type of leaf and the way the tea is prepared.

An average tea leaf contains 3% caffeine by weight, but this can fluctuate. The younger leaves and newly formed tea tips/buds are usually higher in caffeine than the older leaves. Older leaves are stronger and have a lower caffeine content. In addition, the leaf stems will have low levels of caffeine.

You may read the below article that compare the different tea types. The articles also discuss differences in caffeine levels between the tea types:

At last, if you want to know more about whether or not flower tea contain cafeine, you may use this article as a reference:

Tea preparation also plays a large role in the level of caffeine. This can be a combination of the size of the leaf used, the water temperature and the steeping time. Hot water will absorb the caffeine more quickly than cold water. Of course, the longer you leave the tea to steep the more caffeine will be released in the cup.

In general, tea prepared with teabags contains more caffeine than loose-leaf tea. A broken tea leaf infuses more quickly than loose-leaf tea because of the greater surface area to leaf volume ratio. The broken tea leaf ends up releasing more tea caffeine than when it is whole. Do keep in mind that not all loose-tea is whole leaf, and not all teabags are broken leaf, so this is not a definitive rule.

Compared to coffee, tea will not easily give you a dip after drinking. The caffeine in coffee is absorbed much faster by your body compared to a cup made from loose tea or bags. When you compare tea bags with loose tea, you can see that caffeine content is spread over a lower period of time for tea bags. This is because most of the caffeine will be released from the first steep for bags, while for loose tea this is spread over multiple steepds. See the graph below for illustrative purposes: 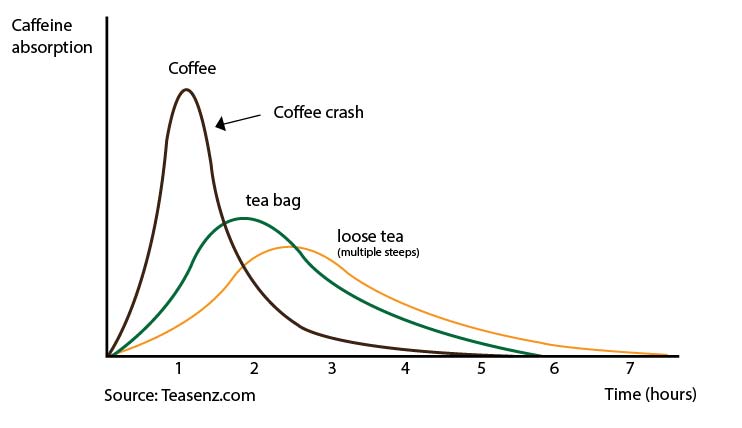 What Are the Benefits of Caffeine?

Benefits reaped from caffeine will depend on the individual's tolerance, and by how much caffeine they consume. There are various studies linking caffeine to a reduced risk of certain afflictions, such as diabetes, cancer, Alzheimer's, and heart failure. However, this research is not 100% conclusive and is up for speculation.

One of the main benefits of caffeine consumption is that in in some cases it has been shown to improve memory. How much of an improvement occurs will depend on the time the caffeine is consumed, as well as the amount. Everyone is different and some people may find caffeine to have the opposite effect. It depends on the person.

Having some caffeine before exercising can enhance and energise performance. This can aid in stress relief, as well as contribute to more productive exercise.

What Are Negative Tea Caffeine Side Effects?

Drinking large amounts of caffeine can cause caffeine side effects like headaches, either because of overdosing or because of withdrawal headaches when reducing intake. Having too large an intake of caffeine can be surprisingly easy to do, particularly if one enjoys a variety of caffeinated beverages daily.

Consuming too much caffeine can result in symptoms such as: an increased heartbeat, trembling, nausea, dizziness, anxiety, insomnia, sweating, and irritability. In extreme cases of caffeine overdose, there can be more serious repercussions – but that is very rare.

If a person consumes too much caffeine, drinking an ample amount of water can reduce the negative symptoms. An herbal tea, such as the soothing digestive aid of chrysanthemum tea, can also help. To avoid this problem in the future, reducing caffeine intake and/or eating some food prior to having the caffeine can be effective. For coffee drinkers, an option is to switch to tea as it contains significantly less or no caffeine.

Can You Decaffeinate Tea?

Contrary to what many people claim, it is not possible to decaffeinate regular tea. Attempting an at-home method of decaffeinating tea will be entirely ineffective, and will likely remove positive elements from the tea (such as antioxidants). For this reason, it is best not to attempt to decaffeinate the tea.

To minimize caffeine intake, you can experiment with herbal and flower tea, which is usually caffeine-free or try white teas with minimal caffeine. There is also the option of buying commercially decaffeinated tea. As noted above, tea made from leaf stems is lower in caffeine. Blended teas containing other caffeine-free ingredients are commonly lower in caffeine, too.

Is you want to know whether caffeine containing beverages are halal or harem, you may read this article: Is Caffeine Halal?

Version: This article was updated on 3 February 2022.

February 2, 2022
Comments
Rar Kami
Where are the data from in that graph? It is not credible because it does not cite a primary source and does not follow basic physiology. To clarify, caffeine is the same substance whether it comes from coffee or tea. It will follow the same metabolism regardless of the source, whether that is a zero order half life or 1st order half life or whatever. Maybe if there was a source it would say that the tea was drunk over a greater period of time, or that there is some other metabolite in tea that affects caffeine metabolism.
Reply
Teasenz
Thank you for your valuable comments. I'll send this to the team to look up the sources we used and add it to this article.
Reply
Mapson
I came here looking for the same thing. Yet after reading the paragraph above the text it becomes clear this is not based on experiments, but it is purely a chart drawn on intuition in order to illustrate this sentence: "This is because most of the caffeine will be released from the first steep for bags, while for loose tea this is spread over multiple steepds. See the graph below for illustrative purposes:" The sentence before that indeed seems to claim that the caffeine from coffee gets absorbed faster, but from the explanation that follows it becomes somewhat clear that this is not *exactly* the claim being made. Hence, I agree the graph is somewhat misleading, and the paragraph could be reformulated to state more explicitly that it is the multiple-steeps and spreading out of the actual caffeine intake that is causing the difference in absorption. Still, nice article. :)
Reply
Michelle J.
For years, I felt that I couldn't sleep well. In fact, I didn't know that tea was the cause. I used to drink tea every evening, but since I stopped. I sleep much better. I seriously didn't think about the caffeine in tea. It seems obvious, but I bet many don't really know that tea contains caffeine, or think the amount is negligible. Well for me it isn't. Do you have any suggestions for alternative (warm) beverages for the evening?
Reply
Teasenz
For the evenings, go for flowers teas such as Chrysanthemum or Lavender. These flowers also have calming effects, helping you to sleep even better :)
Reply
Margot
I have drunk a lot of cold-brew tea in recent months, from both white and green tea leaves. I leave these leaves in cold water for 24 to 48 hours before the tea is drunk. There is therefore no heat or hot water involved. Can you tell me what the caffeine content in the cold-brewed tea is after 24/48 hours? Thanks in advance!
Reply
Teasenz
This will highly depend on the type of tea as well as the water to leaf ratio. Generally, a cup of cold brew tea has 2/3 of the caffeine content of a normal cup of hot tea.
Reply
Linda Niedzwiecki
How can I get a copy of this article. It is so interesting and I should read it often to help me on decisions regarding true decaffeinated teas. I had a kidney transplant and can only during decaffeinated tea. Yea is one of my pleasures...thank you in advance. I only have my phone to read articles and my eye sight is not the best...
Reply
Teasenz
We do not have a PDF version published, but perhaps you can print from the browser and choose 'save as PDF'.
Reply
Halmari
Black tea typically has the most caffeine of all the tea types. Because black tea is oxidized, it allows more caffeine to be extracted from the leaf than other types of tea.
Reply
Search The Blog
Categories
Recent Posts
Tags
Anhua dark tea Black tea Chrysanthemum tea Dan cong tea Free tea giveaways Gaiwan Green tea Kombucha Liu bao tea Oolong tea Osmanthus Pu erh tea Tea history Tea recipe Tea sayings Tea storage Tea stories Tea taste White tea Wuyishan Yixing teapots
Search The Blog