The store will not work correctly in the case when cookies are disabled.
Tasting Notes: What is Sun-Dried Black Tea (Shai Hong)? 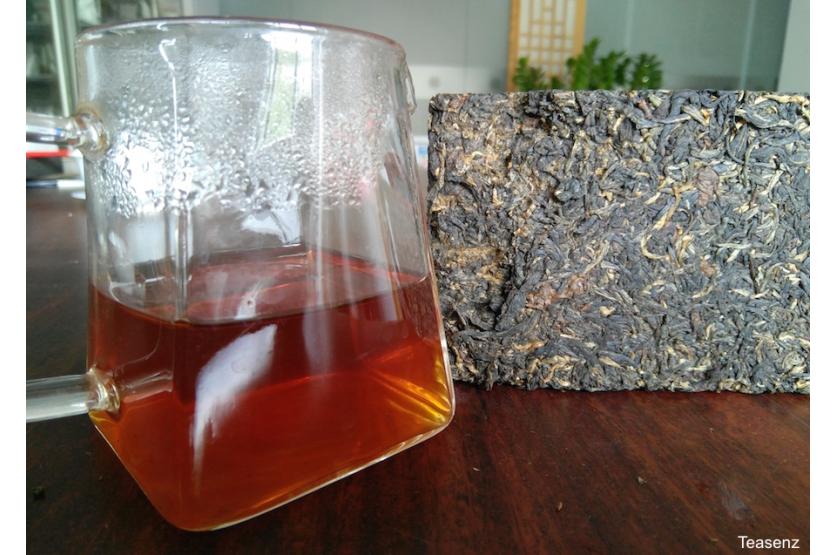 Sun-dried black tea (shai hong) is made based on a different processing method than mainstream black teas. Commonly, black teas are roasted to stop the oxidation. However, for a shai hong tea, the oxidation is stopped by drying the leaves in the sun (as it's done for pu erh and white tea).

Since we discovered Shai Hong, we couldn't wait but to try it ourselves. It was pretty difficult for us to get our hands on this type of tea. We're working with 5 tea growers in Yunnan province, but only one of them was processing Shai Hong in a tea brick as you can see below. So we asked the grower why he decided to grew Shai Hong and his answer is definitely worth sharing:

"I always wanted to try a 3 to 5 year old Dian Hong black tea. A few years ago, I drank one together with friends. I didn't like it. There was hardly any aroma left, the soup was light and there wasn't any texture at all. Nothing interesting. Later on I heard about Shai Hong, which was a kind of black tea that was sun-dried like a sheng pu erh. In 2015, I started to produce this tea myself, to see if by tweaking the production method, would improve the storage-ability of a black tea. I'm pretty satisfied with the result myself. The bitterness is completely gone due to aging, the soup is somewhat thick, and it has still the flavour of dian hong, but slightly more medicinal. Of course, that's my opinion and you should try it yourself. Besides, this brick is made from 2015 leaves, so let's see how it further improves over time." 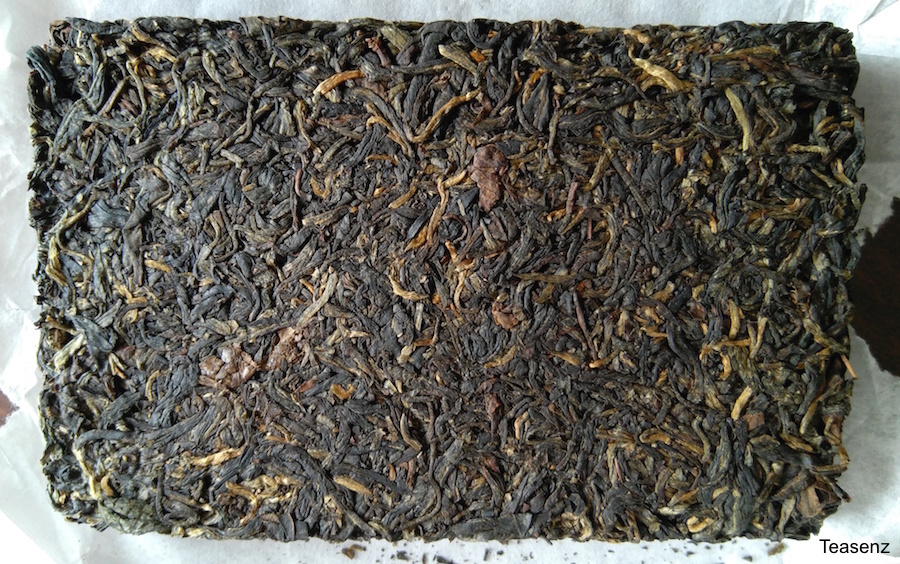 One opening the brick, it looked at first like a sheng pu erh. However, when you put the brick in daylight, you can clearly see the golden buds, which reminded us of a classic Dian Hong Yunnan black tea. An interesting tea! So we quickly started to loosen it up as you can see below. 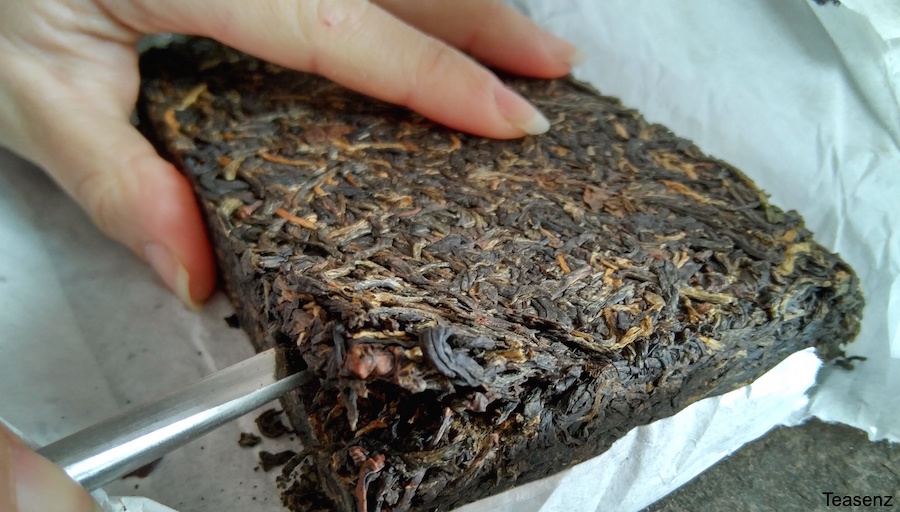 The brick wasn't too tightly compressed luckily, so it was pretty easy to get a few nice chunks quickly consisting of about 5 gram tea.

It's our first time, so we regarded this tea as we're brewing a sheng pu erh. We found that the leaves released flavour quickly as the liquor turned dark pretty fast. It could be because the processing is closer to that of a black tea, but most likely it's because the brick consists of some broken leaves. It's not that strange, most often bricks are compressed out of lesser grade leaves. This doesn't mean it not tasty at all. So we started sipping this tea... 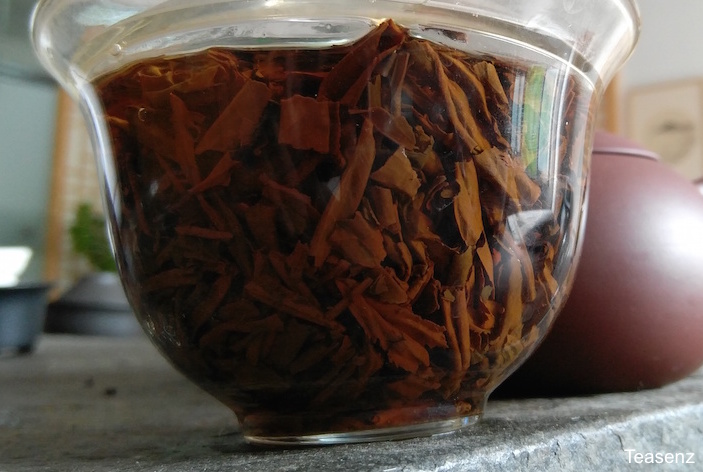 The colour of the brew looked like something between a black tea and a ripe pu erh tea. Pretty intense dark red, though we brewed it for only 10 seconds. Not strange, because our gaiwan was fully filled with leaves once they expanded.

The taste was really interesting and was 'confusing' because we couldn't really place it. The first sip told me it was the aroma of a Yunnan black tea, but then the after taste was kind of like a ripe sheng pu erh. The texture was indeed thicker as the grower told us, something that also reminded us of a shou pu erh. The smoothness is amazing and probably due to the 2 years of aging. We also noted that the aging allowed us to brew the leaves up to 9 brews, which is pretty amazing for a black tea. The aging seems to result in more yield. If the brick was made of full leaves and buds, the yield could even be higher.

Overall, we think we can pretty much summarise this tea as a Dian Hong black tea with the texture of a young ripe pu erh. We loved it and it was definitely a highlight of our working day or perhaps working week. It's a tea we recommend to those who love a classic Yunnan black tea or a ripe pu erh drinker. It's also great for those who love teas with notes of caramel or dried fruit.

Update March 2017: After drinking this tea several times during the past few weeks, we discovered that it tastes better when steeped at a lower temperature than pu erh. A temperature around 85 C (185 F) seems to be about right. At full temperature is still possible, but you've to do really really short steeps or the flavour will overwhelm the black tea aroma.

The Shai Hong brick reviewed on this page are completely sold out. We initially didn't expect such a popularity, so we didn't stock up enough. However, you may try our latest Shai Hong black tea cake.

February 24, 2017
Comments
Rafeal
I've received the tea today, and tried it directly. Wow what a tea! I love at a lower temperature, and I can many many steeps out of one chunk!
Reply
Teasenz
Thanks for the feedback! You're not the first one. We've shipped a dozen bricks to tea lovers worldwide, and we've received very positive comments. It was also a great pleasure to work with a farmer in Yunnan on this project, so perhaps it will be available in our store soon.
Reply
Melvin Tran
I'm a fan of this tea now, so unlucky that you guys sold out! I hope there will be an opportunity to get it again. It's just amazing how often it could be steeped. I applied a 8 gram chunk and could easily get 10+ steeps out of this. It's not like a ripe pu erh that is still dark at the final steeps but without much flavour. With this sun dried black tea brick, I found that the last steeps are still very fragrant. Especially steep 3-6 are really amazing in which the sweet aroma's really come to the foreground.
Reply
Teasenz
Hi Melvin, we saw this tea more as a one time project. We didn't expect much sales from it. Instead we just found it a really fun tea to introduce on our blog. However, the interest exceeded our expectations, so we ran out of stock. The farmer who we sourced it from also doesn't have stock anymore. However, in April we do expect a new batch of 2017 shai hong. Stay tuned!
Reply
Search The Blog
Categories
Recent Posts
Tags
Anhua dark tea Black tea Chrysanthemum tea Dan cong tea Free tea giveaways Gaiwan Green tea Kombucha Liu bao tea Oolong tea Osmanthus Pu erh tea Tea history Tea recipe Tea sayings Tea storage Tea stories Tea taste White tea Wuyishan Yixing teapots
Search The Blog