Menu Search Account
Cart
You have no items in your shopping cart.

Menu
Swipe to the left 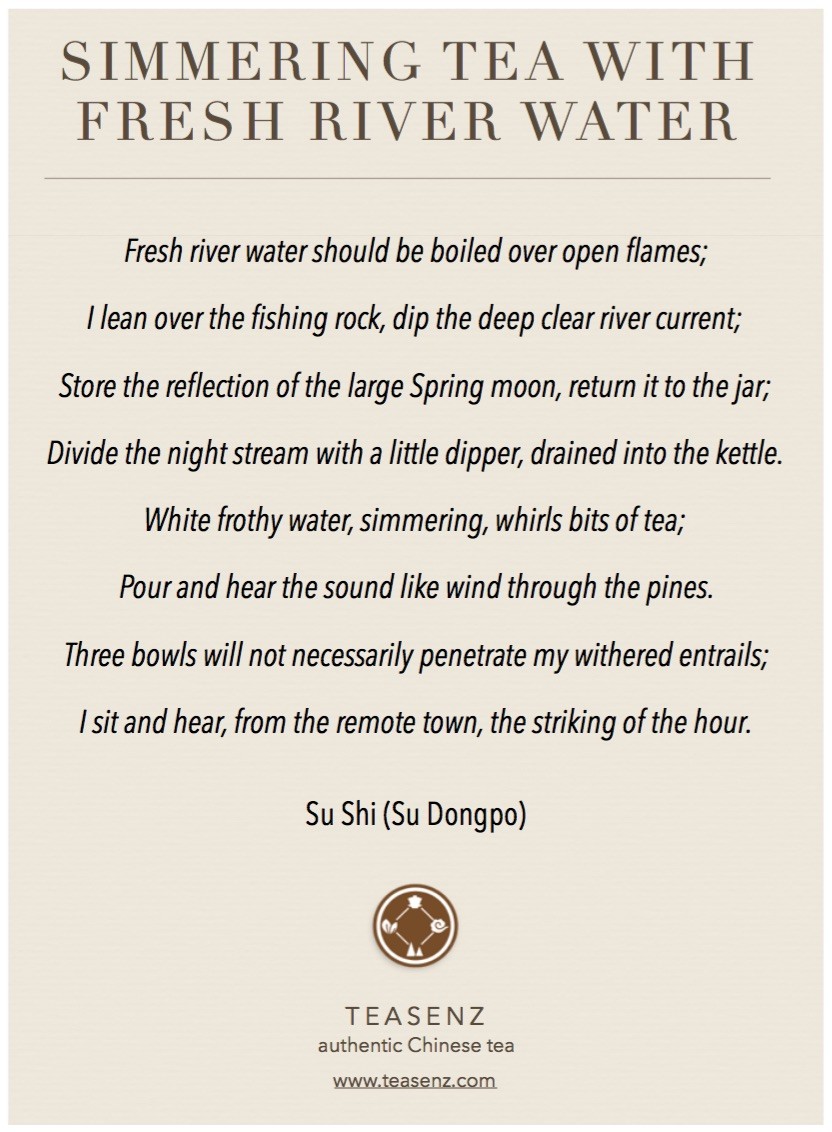 There were plenty of tea poems that appeared during the Tang and the Song Dynasty in China. As those dynasties are considered relatively peaceful, tea culture flourished and brewing tea became more and more a leisure activity.

Su Shi (1037-1101), also know as Su Tungpo, was a Chinese writer, poet, painter, calligrapher and statesman of the Song. As a tea enthusiast, he isn't as visible as other tea poets, as he's been more famous for his poems on the Battle of Red Cliff during the Three Kingdoms. Never, the less he showed his love for tea in many of his works. In this post, we introduce you one of his tea poems today. We hope you enjoy it!

(Alternative title: Dipping water from the river and simmering tea)

Fresh river water should be boiled over open flames;

I lean over the fishing rock, dip the deep clear river current;

Store the reflection of the large Spring moon, return it to the jar;

Divide the night stream with a little dipper, drained into the kettle.

Pour and hear the sound like wind through the pines.

Three bowls will not necessarily penetrate my withered entrails;

I sit and hear, from the remote town, the striking of the hour.

Here's the original in Chinese:

For Mandarin-Chinese learners we also include the pin yin pronunciation of the above Chinese characters.

Did you like the poem? Or do you have any questions about it? Feel free to leave a comment below. Translating this poem was quite difficult, so if you know a better translation for certain sentences, please let us know!

#Tea sayings Posted in: Tea Culture
Leave a comment
Hsiaoshuang August 30, 2018 at 12:11 AM
Thanks for publishing this thoughtful poem by Su Shi. By the way, do you also have the Chinese text for Su's poem on life is like a dream in spring? I couldn't find it on the Internet. Would appreciate if you can e-mail to me. Thanks & regards.
Reply
Teasenz August 30, 2018 at 3:14 AM
There's no poem from Su Shi with that title. Are you referring to a poem named 'bring spring'? There's a quote though that goes: "事如春梦了无痕". This means: "life's like a Spring dream that passes without a trace".
Reply
Categories
Search the blog
Tags

Please enter your email below and we will send you a new password.

Other Login
Other Social Login