The Origin of Moonlight White Tea: Is Moonlight Beauty a White or Pu Erh Tea?

Posted in: How To Make Tea, Types of Tea
No comments

The Origin of Moonlight White Tea: Is Moonlight Beauty a White or Pu Erh Tea?

As the tea industry continues to develop the traditional classification of tea is under pressure. In a recent post, we’ve explained why ‘Shai Hong tea’ is a special kind of tea between black tea and pu erh.

The ‘Moonlight White’ is again one of those teas don’t fit in one of the usual categories. It’s name suggests it’s a white tea, yet often times they’re presented in the form of a tea cake, which makes you think it’s a pu erh tea. Before we dig deeper into the unique characteristics of this tea, let’s first learn more about its origin.

The Origin of Moonlight White Tea

In China, this tea is also known as ‘Yue Guang Bai’ (月光白) or 'Yue Guang Mei Ren' (月光美人, Moonlight Beauty). The raw leaves of this tea are from Jinggu big white leaf cultivar trees in Yunnan Province. It’s therefore not strange that most of today’s Moonlight White tea is also produced in Jinggu. 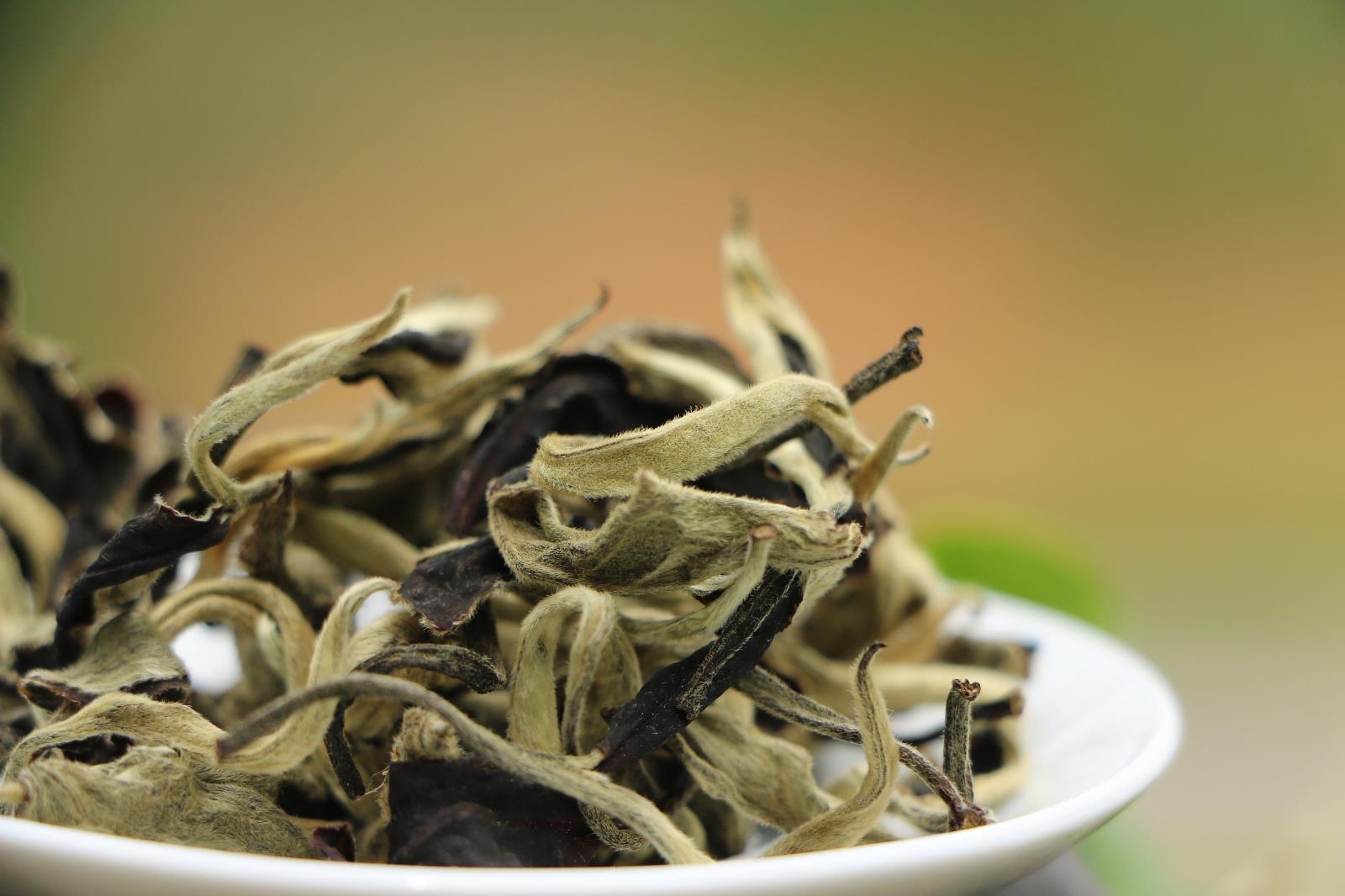 As said, Moonlight White’s raw material are leaves of the Jinggu big white leaf cultivar. The tea leaves and young buds are covered with white down. The back of the leaves turn dark when they are wilted, resembling ‘white moonlight’ during the night, hence another explanation the name.

The fragrance of the dry tea leaves is fresh and the infusion tastes smooth, sweet and soft. The aroma and texture of this tea reminds one of an aged white tea. Because aged white teas are more popular in China than fresh white teas, the Moonlight White is also often classified as a white tea.

Yet, in the West, fresh white teas are the most common. Therefore it’s arguable whether it’s correct to classify this tea as a white tea or raw pu erh tea. Let’s take a look at the processing process to determine what category is more suitable for the Yue Guang Bai.

While this tea is from Yunnan, where pu erh tea is produced, the production process of Moonlight White is less complex.

Before the sunrise, fresh leaves with dew are picked. Often times, those consisting of 1 bud and 1 leaf or 1 bud and 2 leaves are picked. Note: it’s often exaggerated that the leaves are picked very early ‘under the moonlight’. This is a wonderful explanation of the name, but in practice, this is hardly true. Picking the leaves during the moonlight also doesn’t really change the flavour or aroma of the final product.

The fresh leaves are then spread indoors on a wilting bed at a thickness of 1-2 cm. The room temperature is carefully controlled at 28°C - 30°C, while the humidity has to be between 50% - 53%.

The leaves will go through the withering and drying process for two or three days by resting in the controlled room. The fact that the leaves are withered indoor and are never exposed to the sun is an important difference compared to traditional pu erh tea and white tea. The latter two types are sun dried.

This wilting process is crucial to also create the contrasting black and white colours: one side of the leaves will turn dark, while the buds and leaves covered by white down will stay light.

Because the tea leaves never sees the sun light once they’re indoors. A part of this tea’s story telling is that the leaves ‘are dried under the moonlight’. This is in fact one other explanation of its fancy name, though only means that the tea aren’t exposed to the sun. It’s true though that in the old days, people actually did let the leaves wither and dry under the moonlight!

Moonlight White has a good aging potential. Therefore they're often compressed in cakes for convenient storage. 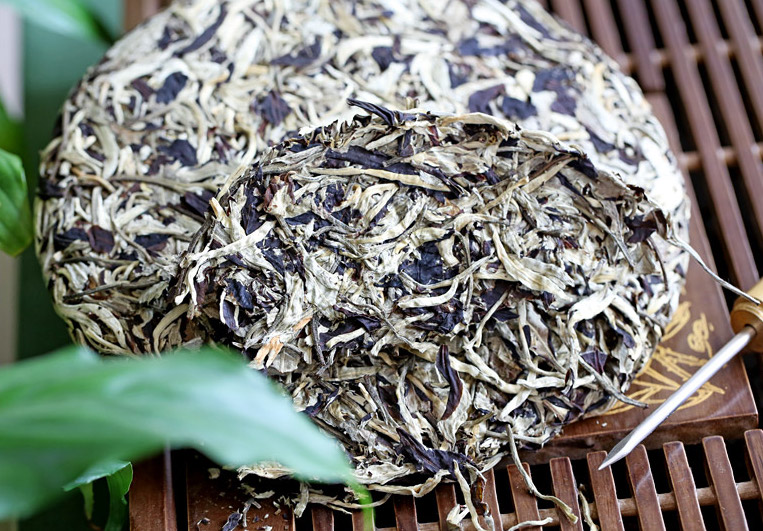 To make it even more complicated, the leaves of the Jinggu white leaf cultivar is also used these days to produce Sheng puerh. The result is that appearance is very similar to the white tea version. Yet it is a raw pu erh. Also these teas are called Yue Guang Bai (Moonlight White). So in conclusion both 'Moonlight White' white teas and pu erh tea exist, even though the former is much more common.

Having explained the production process, we now know that Yue Guang Bai white tea is also a mildly fermented tea (due to indoor wilting). This wilting process is longer than traditional fresh white tea, but closer to aged white tea cakes. Therefore, you can brew many more infusions relative to fresh white and green teas.

The taste is also as soft, sweet and thick like aged whites. The sweetness also reminds of one delicate Chinese black teas. 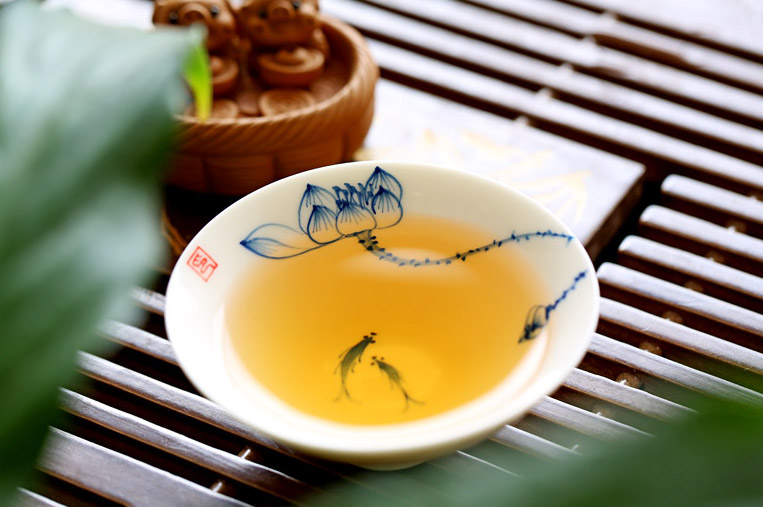 Yet Yue Gung Bai also has this very recognisable pu erh flavour from Yunnan. Most likely, this is due to the fact that tea leaves are grown on Yunnan soil and because the Yunnan cake compression techniques are used.

Given all the characteristics, we think the Moonlight White should be classified as an aged white tea. We understand that ‘aged white tea’ isn’t an official category (green, white, oolong, black, yellow, pu erh), yet perhaps it’s time to look beyond the traditional classification and judge each tea for its own unique characteristics.

This tea is very flexible when it comes to brewing. Prepare a chunk of it in a mug, will result in a good tea. It’s a very forgiving tea that’s hard to over steep. Yet, if you want to enjoy the preparation process and get the best flavour out of the leaves; go for traditional brewing!