The store will not work correctly in the case when cookies are disabled.
Yancha Comparison: Qilan versus Rougui Rock Tea
Wuyishan
Posted in: Tea Growing Regions
No comments

Today, we’re tasting the Qilan and Rougui oolong tea from Wuyishan, which are part of our 'Rock Tea' Sampler. Rock tea is also known as 'Yancha' and refers to all oolong teas from the Wuyishan region in Fujian province. Teas from this area owe their flavour to the mineral rich soil on which they're grown.

For first time yancha drinkers, it can sometimes be hard to differentiate the nuances in flavours. By comparing the teas, which at first seem very similar, we aim to uncover their differences.

This already starts with just observing the dry leaves of both teas. When you look at them separately they both just seem be just dark black leaves. But now we've put them together, you can see that the Qilan appears to show some green colours while the Rougui appears to brown/black. This indicates that the latter tea is more strongly roasted, and thus more oxidised.

For each of the tea, we’re steeping 4 grams of leaves (half a sample bag) in a gaiwan. We could’ve steeped the whole sample bag, but since it’s Spring season there’s still a dozen of teas that we haven’t tasted yet. So we want to reduce the amount of steeping per tea, to avoid getting tea drunk :) 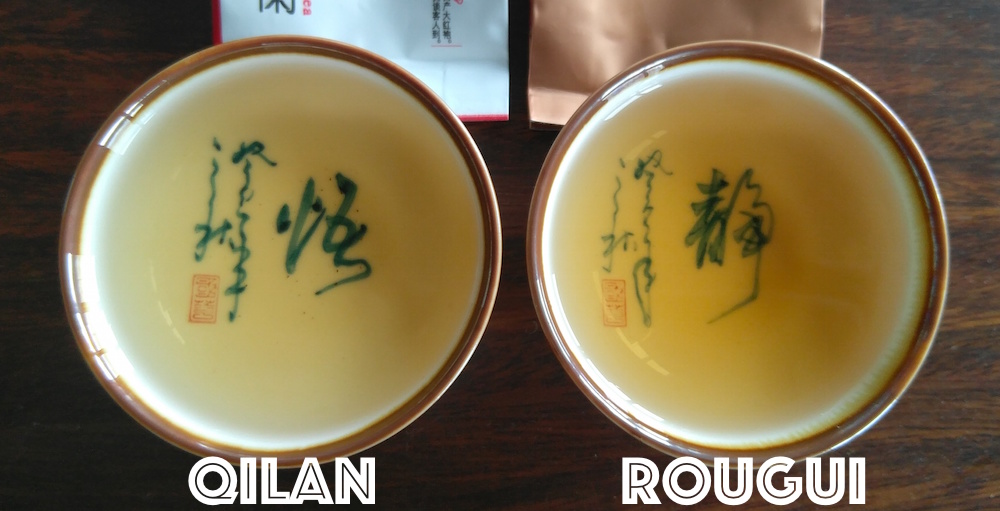 Consistent with the dry leaf observation we see that the darker Rougui also steeps a slightly darker brew. Both teas could easily last for 5-6 steeps. If we’d steeped 8 grams instead of 4 grams, we probably would end up with around 10-12 brews.

The Qilan flavour is mild and refreshing. It’s slightly vegetal with a flowery aroma. On the other hand, the Rougui is more intense and savoury. The stronger roasts results in aroma’s of cinnamon, spices and dried fruits.

It's not unexpected that a different level of roasting results in very different teas. Teas are classified based on their processing after all. What's special about oolong tea is that, the farmer is more free to vary with the different levels of roasting to finish off the tea, resulting in unlimited possibilities.

Below an image of the steeped tea leaves.

The level of oxidation becomes even more clear when we observe the wet leaves. While it wasn't easy to spot the differences when comparing dry leaves, with wet leaves, the colour difference is now very obvious. The Qilan reveals its much greener colour while the Rougui has a mix of brown and black leaves.

What are your oolong tea preferences? Or do you still need to discover what oolong tea you like? A good starting point is to first find out what level of roasting you love. Try out our Oolong tea sampler to discover the full range of low, medium and high roast oolongs from Wuyishan.