The store will not work correctly in the case when cookies are disabled.
13 Traditional Tea Pets & Their Meaning 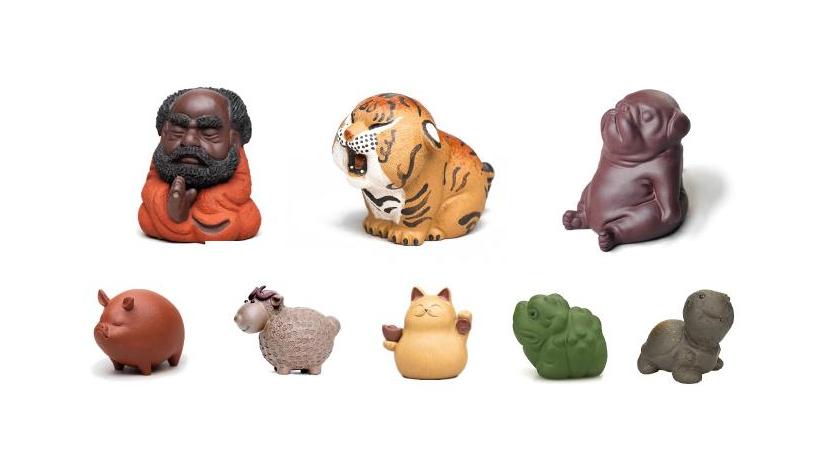 Tea pets are ceramic figurines, mostly made of Yixing purple clay (Zisha). Chinese tea lovers believe that a fun and meaningful tea pet not only adds fun to the tea sessions, but also brings in luck and fortune.

Pouring the tea over your tea pet will nourish it and wash away the hustle and bustle of the world. In a way, the process of raising tea pets is also a process of self-cultivation. 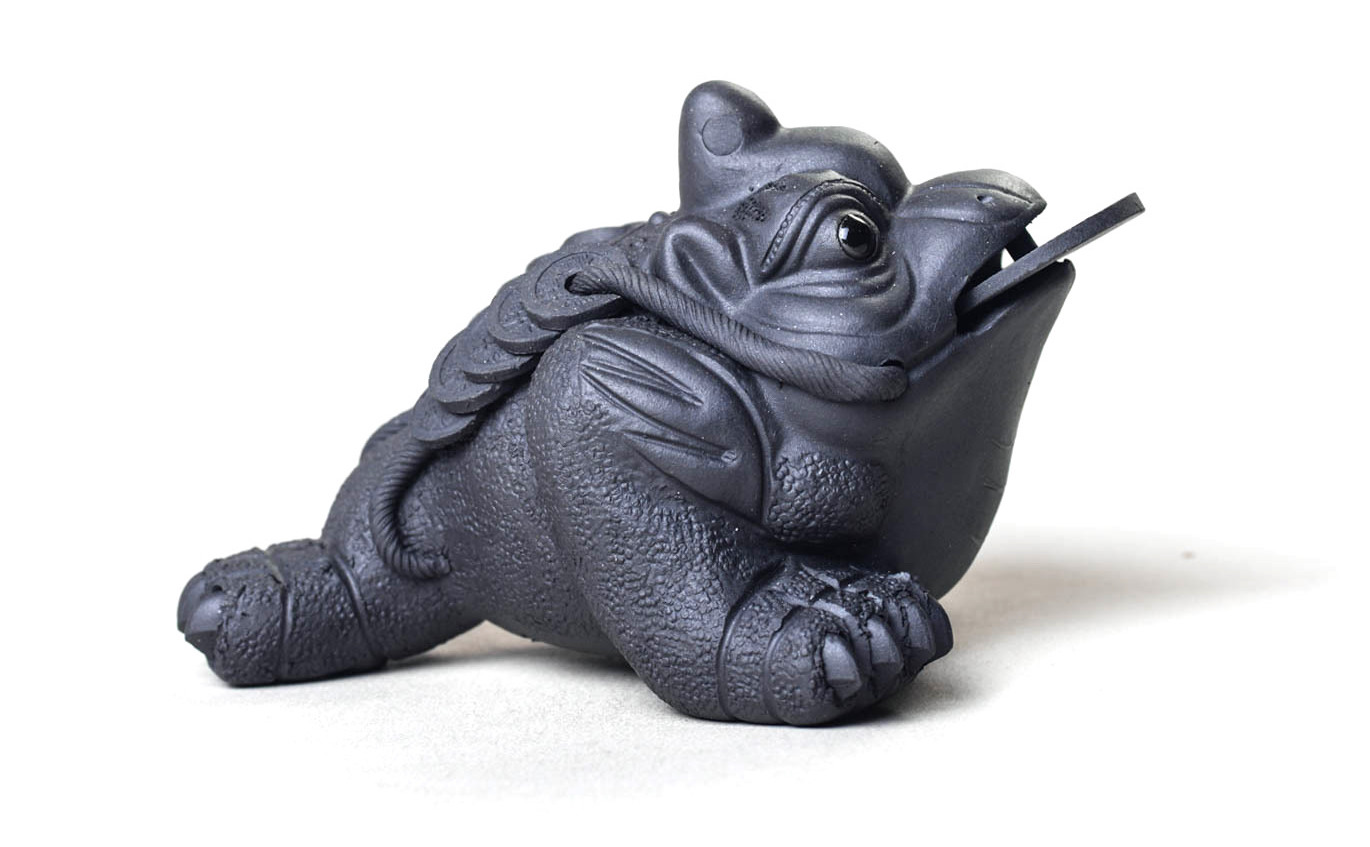 three-legged toad tea pet is called "golden toad" (Jin Chan), which is a homonym for money (Jin Qian) in Chinese. It loves eating coins! There was a story of Liu Hai (one of the gods of wealth in Chinese folklore) who saved the golden toad from a well by throwing a cord of gold coins to it, and Liu Hai became immortal because of the deed. Today, golden toads are not only decorative, but also believed to ward off evil and attract wealth.The coin held in the mouth of the golden toad can often be turned, meaning "to make money". When there is no coin in the mouth, it means it attracts the wealth.

IMPORTANT: It's very important that the frog faces you if has a coin in the mouth, or your wealth will leak away! 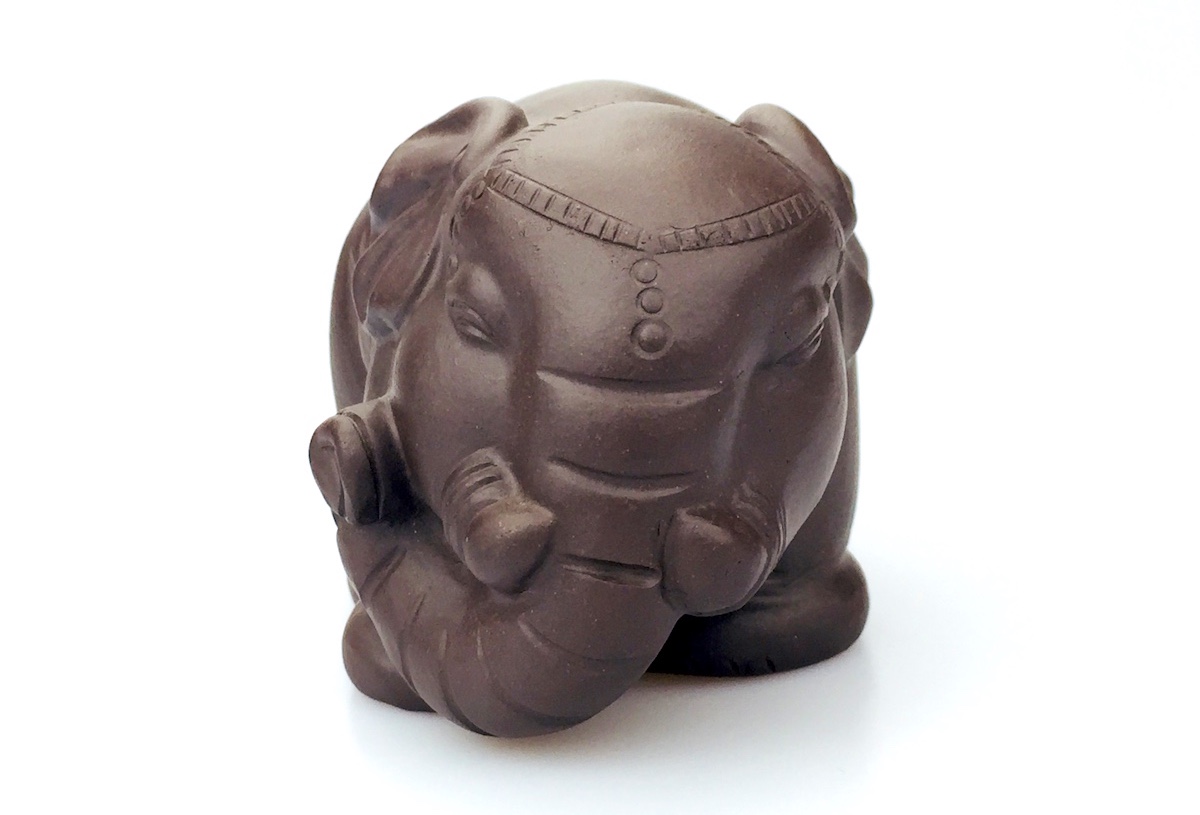 Elephant tea pets are quite popular among tea lovers. In Chinese traditional culture, the image of the elephant is gentle, peaceful, strong and intelligent. And the pronunciation of elephant in Chinese is the same as the word auspiciousness, that’s why elephant is an auspicious sign. The Fengshui believes the property of the fortune is water, with its long trunk that absorbs water, elephant is also a symbol of wealth.

People who believe in Fengshui will put the elephant in the most prosperous place indoors, and the whole family will benefit from it. Basically find a bright place with green plants is the best for its placement. Thus, if you place it on your tea table, also put a green plant next to it to make it happy. 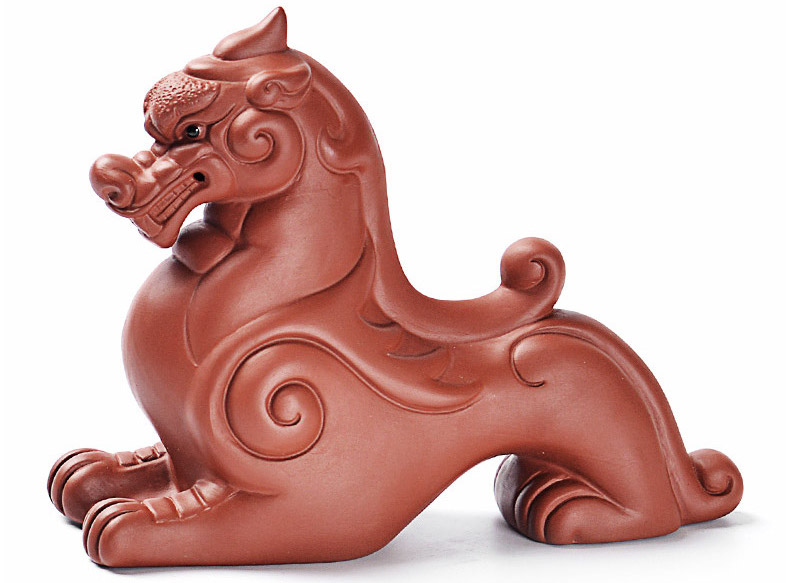 Qilin is a symbol of kindness and good luck. According to legend, it only appears in peaceful times, so it represents peace and longevity. It looks like it has a head of a Chinese dragon, but the body is the combination of a lion, ox, or horse, with one horn on the head. Because of its unique image, Chinese people often use Qilin to refer to outstanding and noble people.

A qilin should be placed on the tea table facing the door or window.

A buddha tea pet can bring people happiness and a better tomorrow. His big belly can accommodate anything ordinary people find difficult to tolerate. With the constant smile on his face, he can always make troubles go away. Buddha tea pets are generally in a sitting or a lying posture, makes people feel chill just looking at it.

Choose the size that matches the tea tray so that they complement each other. His smiling face should greet the guests, spreading good vibes.

Pixiu has a deep-rooted status in the ancient Chinese culture. Legend has it that Pixiu is the ninth son of the dragon who feeds on gold and silver. It only eats but never defecates, which makes its belly a treasure chest. Having a Pixiu at home means endless fortune keeps rolling in. Moreover, Pixiu can drive away the vanity and agitation in people's hearts and bring people good prospect and tranquility.

Its head should be facing the opening to the outside world, like a door or a window, better for it to draw the money in.

Since this isn't really a 'pet', we might better call it a 'tea artifact'. The Chinese cabbage’s pronunciation is 'Bai Cai', which sounds like "one hundred kinds of wealth" in Chinese. If it was a jade Chinese cabbage, the sound Yu Bai Cai is even more auspicious, meaning 'coming across' loads of money.

Not all luck seekers are in love with a Chinese Cabbage artifacts though. In China, people also use the term 'cabbage price', which means a 'cheap price'. Perhaps, its this contradiction that makes such item just really fun. As such, there's also not really any placement ettiquette for it. Just place it where you like it to be on the tea table. 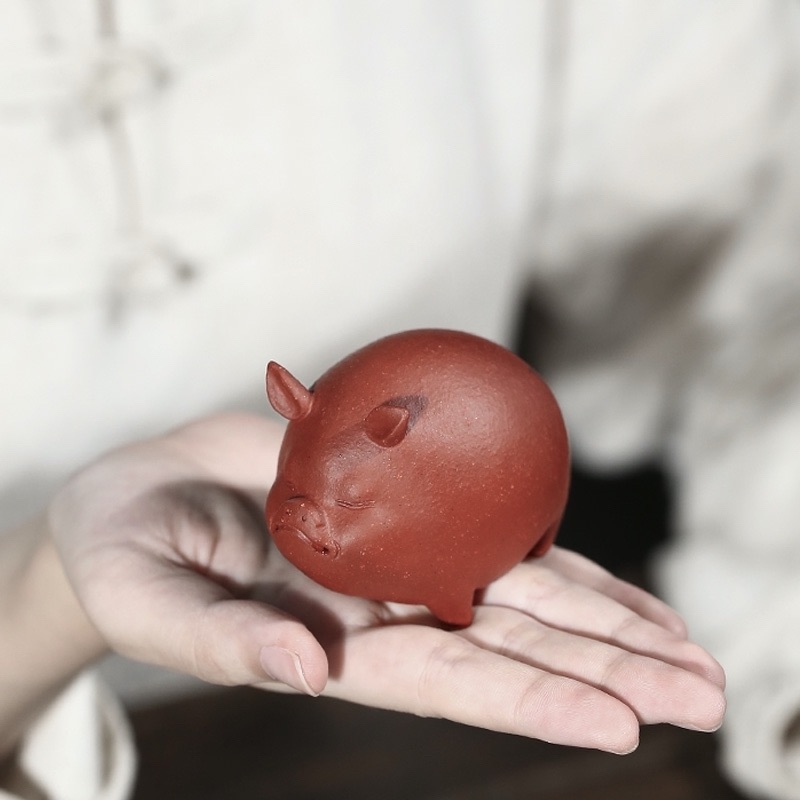 Pig has always been a symbol of good fortune and wealth. In the farming society, pigs and horses, cattle, sheep, chickens and dogs are "six livestock". If there is no pig at home, it is not even a home. The plump look of the pig is always adored by Chinese people.

A pig tea pet should face a door or window to attract wealth. Like frog tea pets, if it's decorated with coins, then it should be facing you. 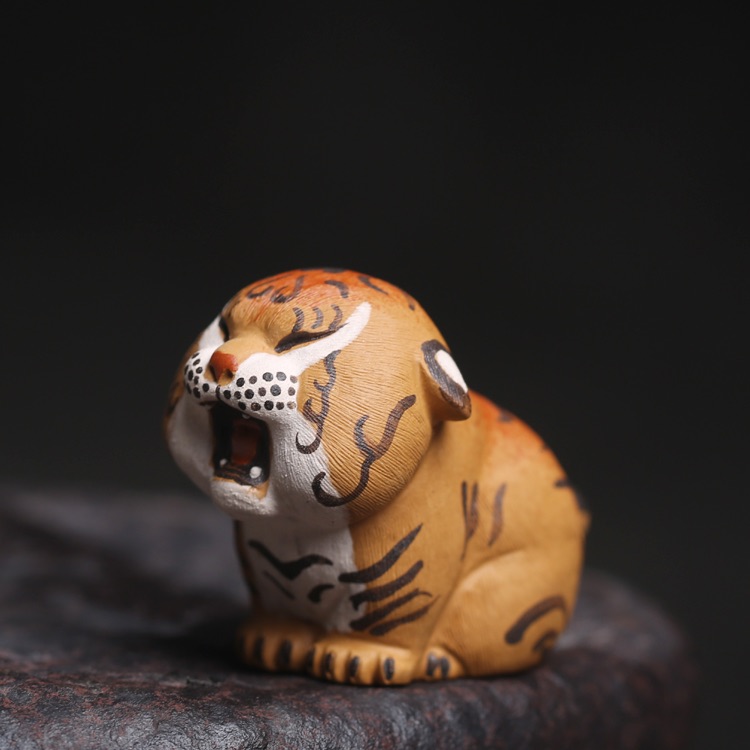 The placement of tigers on your tea table will depend on what you want to achieve. If you want him to give you courage and will power, please place it on the left or right corner facing you. If you want it to project you, then place it facing the door of the room.

Bat is 'Bian Fu' in Chinese, and 'Fu' means good luck and good fortune. The animal represents a blessing from heaven. On the walls of traditional homes in southern China regions, you can often see a inverted "Fu (福)" written, surrounded by four bats drawn at four corners.

A monkey riding a horse means promotion. If it was a big monkey carrying a baby monkey on the back, it means generations of good luck. If there were three monkeys that covered their eyes, mouth, and ears individually, it means no evil should be seen, no evil should be heard, and no evil should be spoken. They are Three Wise Monkeys, adapted from The Analects of Confucius.

There's no specific placement etiquette for a monkey tea pet.

A turtle is a symbol of longevity. Ancient people believed that turtles can absorb the aura and spirits of mountains and rivers, and that it brings auspiciousness and tranquility. Turtle has become the spirit of the leading prophet, that can balance the Yin and Yang. If the tea pet is a turtle on the back of the other turtle, it means that the generations to come will be blessed.

A turtle tea pet should always face you.

VERY IMPORTANT: If you've grandparents visiting, make sure it faces them. Even better, make sure you have two turtle tea pets when they're visiting.

Carp means good luck. As a traditionally loved spiritual fish, it is also a symbol of opportunity. The belief has spread from China to Japan long ago. Every Boy's day (Children's Day) in Japan, families with a son must hang a beautiful carp flag outside the house; On the opening day, shops will keep a tank with carps in it, meaning "good market". Carp can be seen everywhere, especially during festivals. When greeting the god of wealth in the Chinese New Year, a pair of golden carp has to be present. Keeping one carp tea pet just make sense - just like a fish in water.

There's specific placement etiquette for this tea pet, however, it's better if you have 2 of them together.

Peanuts is spelled in two characters '花生‘ (hua sheng), and the second character alone means to give birth. Hence, Chinese associate peanuts with fertility and longevity.

Making tea pets in the shape of peanuts is a new phenomenon of the recent years. If they're made well, they really look like real ones. When you see them on a tea table, they aren't often associated with the traditional meaning. People just find them fun to look at. Because peanuts are often consumed during free time in China, it adds this leisurely experience while drinking tea.

Peanut tea artificats are just for fun, so there's no specific placement etiquette for it.