The store will not work correctly in the case when cookies are disabled.
Pu Erh Tea Taste Explained! 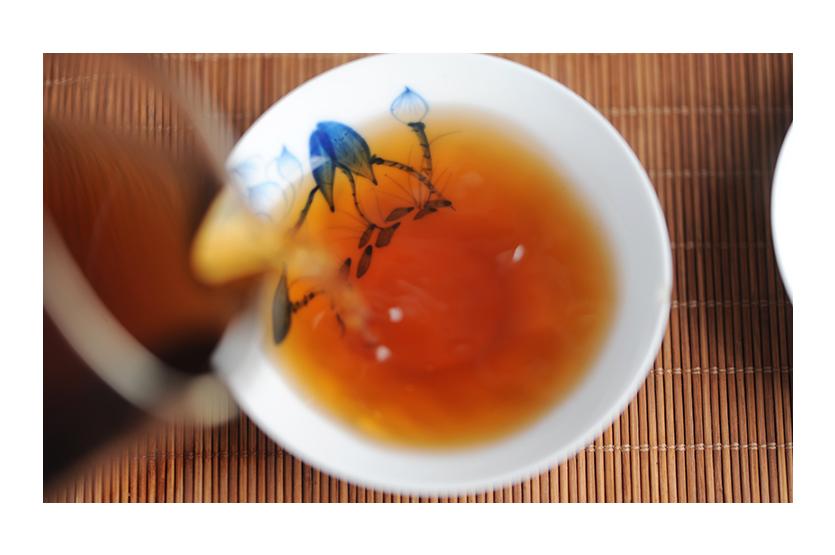 Pu erh tea tastes like dirt! That's what you'll hear some people say when they first try pu erh taste. Those who had a bad experience trying this post-fermented tea the first time, might believe you need an acquired taste for it. As a matter of fact, Pu erh has a wide spectrum of flavours, and you sometimes just need to find out what matches your taste.

Pu erh is unique in the world of tea. There is no other tea like it in terms of processing, storage, and taste. Different factors such as origins of the raw materials, soil, altitude, time, storage conditions affect the taste of pu erh and make it such a fascinating type of tea.

What are the main flavours of pu erh? What are the factors that affect the taste of pu erh? Being aware of all this will make you enjoy pu erh at a deeper level and make you a more knowledgeable pu erh buyer. Let’s go through some of the main aspects and find out!

Generally speaking, Pu erh can be sweet, bitter, floral, mellow, woody, astringent, sour, earthy, watery, or even tasteless. A combination of tastes appear in one single steeping. Bear in mind that the taste also changes as the tea ages. So, don’t throw away your pu erh if you didn’t like it the first time.

Raw Pu erh (sheng cha) and ripe Pu erh (shu cha) are the two main categories of pu erh. Sheng cha is generally bitterer, with a strong green vegetal flavour. But after some years of natural aging, the bitterness would disappear and the charming aged aroma would arise. Because of that, sheng cha is popular among pu erh collectors.

If the wo dui wei stays, you can consider airing and awakening your pu erh in a yixing jar.

Besides these 6 famous tea mountains, new contenders have appeared in the recent period. See this pu erh tea mountains map with all mountains shown.

Wild arbor tea are grown in the nature and tastes calm, sweet and soft. Although the aroma isn’t as strong as the garden tea, but it’s broader and deeper. The taste of wild tea is more comprehensive and smooth.

Garden tea tastes thinner and more stimulating compare to wild tea. It has a strong sweet aftertaste and a high aroma, but don't last as long as the wild arbor tea. Garden tea is classified in different grades.

The distinction between garden tea, arbor tea, and arbor tea from famous tea mounts can greatly affect the price of pu erh.

Aged pu erh has a distinct taste (chen wei), also called aged aroma (chen xiang). No matter the tea is raw or ripe, after 3-5 years of appropriate storage, chen wei would be there. That’s the result of the activities of micro-organisms in the tea leaves. The older the tea gets, the stronger the chen wei is - because the gradual process of micro-organic growth. The aged taste is considered a part of the charm of pu erh as the tea will become more mellow and smooth.

It's however a common misperception that older must be better. Individual pu erh drinkers might have preferences for young, mildly aged or aged pu erh. Those who drink young pu erhs prefer the strong characteristics of fresh bitterness and astringency.

In order to let the pu erh age well, in other words, to let the micro-mechanisms in tea leaves to work well, there are 3 aspects of concern: air circulation, temperature, and humidity. If any of the aspects went wrong, the tea will age badly. For example, if the storage environment was too humid, the tea would taste musty; if the air circulation was bad and if there were other smells in the room, the tea would absorb those smells too. These types of tastes/smells of the tea are called the storage taste – cang wei. Under different storage conditions, same tea can taste very different.

Sometimes pu erh tea can taste like fish which could mean that it was stored in unsanitary conditions.

After appropriate storage and aging of the tea, the taste of pu erh should be mellow and smooth. The liquor feels soft and silky in the mouth and the throat. Young pu erh might be smooth, but it’s rarely mellow. Experienced pu erh drinker would describe this taste of aged pu erh as “rice soup sensation”.

In Chinese, there is a term for the sweet aftertaste of tea "hui gan". If you are a tea drinker, it should be a familiar experience. Pu erh is made of the large-leaf variety from Yunnan Province which has a strong bitterness, but once the bitter sensation is gone, the sweet aftertaste appears in the mouth. Unlike other types of tea, the hui gan of pu erh is generally quite long-lasting. You can feel it down the throat rather than just on the tongue, people called it “hou yun”, means the “throat charm” of pu erh.

Normally, tea leaves from Lincang tea region have a heavy bitterness and those from Yiwu and Menghai are lighter (except for Banzhang and Bulang area). There are also variations in the bitterness. For example, Pu erh from Yiwu, Banzhang and Mengku is bitter but not sharp, and there is a balance between bitterness and astringency. Note that the bitterness is also related to the amount of tea, water temperature and the steeping time of the infusion.

Many pu erh collectors prefer to collect cakes that have a strong bitter taste, believing those cakes will age better over time. Based on our experience, cakes with good aftertaste (hui gan) and a thickness of flavour generally do better over time.

Some pu erhs may cause dryness in the mouth. However, this shouldn't be excessive. If the dryness is unpleasant and even tightening your throat, we call this 'locked throat' in Chinese. Read this article for more info about the causes of dry mouth feel and throat feel.

Fresh leaves were supposed to be dried in the sun, but during the cloudy days, they had to be dried with firewood, which caused the smoky taste. Another reason is that firewood was used during the process of stir fixation.

Whether the smoky taste is good or not is totally subjective. Some people think the smoky taste is unpleasant; others think it actually smells good and call it the “old tobacco flavour”. There were times when such tea was actually really popular. Nowadays they're more a taste of the past.

Now that we've discussed the different aspects of how pu erh tea can taste, it's important to also prepare it carefully to draw out all these flavours. Watch the video below to see how pu erh is made gongfu style:

November 19, 2018
Comments
James Donado
Have been drinking pu-erh teas for a bout 5 years. I have a pretty good collection of cakes ranging from 1990s to 2017. I find sheng more intriguing and have much more of this. I am very careful about storage and have come up with a pretty good system. Anyway, I have been trying to learn more of the terms used to describe flavor profiles. This article was very helpful. Thank you for posting.
Reply
Dan
I am new to ripe pu-erh and the cake that I bought makes a tea that is totally tasteless. It is smooth and mellow and has a nice color but tastes like absolute nothing. Any thoughts?
Reply
Teasenz
It's surprising to hear that a ripe pu erh has no taste, as they normally are full of taste. It could simply be a quality issue or stored too dry for too long. Try to store it unsealed, so just in its original wrapper, at room temperature. Don't put it in a zip bag, to allow for more air circulation so that it re-activate the flavour. Then revisit the cake after a month and try again.
Reply
Dan
I bought my first cake of ripe pu-erh and it has no taste. It is smooth and mellow with a nice color but utterly tasteless. Like drinking hot water. Any thoughts?
Reply
Search The Blog
Categories
Recent Posts
Tags
Anhua dark tea Black tea Chrysanthemum tea Dan cong tea Free tea giveaways Gaiwan Green tea Kombucha Liu bao tea Oolong tea Osmanthus Pu erh tea Tea history Tea recipe Tea sayings Tea storage Tea stories Tea taste White tea Wuyishan Yixing teapots
Search The Blog