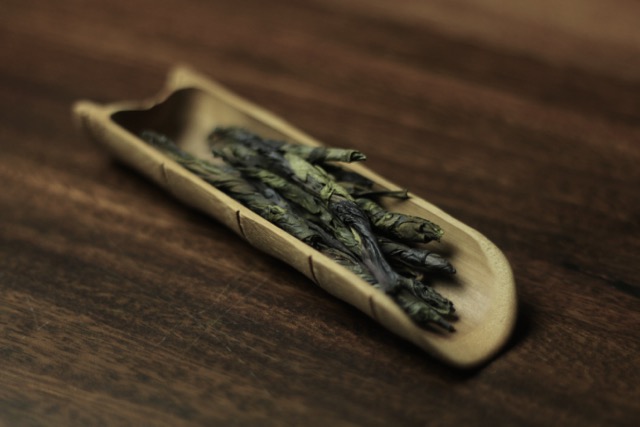 Kuding, is a type of plant that grows in China. According to historical documents, this plant has been applied as a medical herb for over 2000 years. During the Song dynasty, it was presented as a tribute tea to government officials. Later on, the production of Kuding tea (or kuding cha) increased, and become a popular folk medicine. The tea is also often referred to as Needle Kuding as the flat leaves are often rolled into needle like shapes.

Given the rich history of this herb, we’ve looked into the health benefits of kuding. Medicinal practitioners might apply this herb when the following is observed:

However, when medicinal doctors prescribe kuding it often comes in a more concentrated form such as powder. If real herbs are provided, generally the patient is instructed to cook it in hot water for several hours. This results in a highly concentrated medicinal beverage that generally tastes very bitter.

Interested in trying Kuding tea yourself? Then, buy Kuding tea online. On this page, there's also a video that demonstrates how you can prepare it in a tea infuser.

In the non-medical world, kuding is often consumed as a tea in China. The effect is therefore much lighter, and therefore is generally considered safe for long-term drinking without consulting a doctor. In addition, the after taste is more pleasant and often described as slightly sweet and refreshing. Below also some other Chinese herbal teas that are available in our online shop:

In a recent study published in 2019 (Molecules), scientist have concluded that polyphenols in Kuding can protect skin cells, collagen and elastin, thereby prevent skin damage in mice.

In a study published in 2017 (Nature International Journal of Science), researchers found that kuding oppressed weight gain in mice relative to mice that were not treated. This suggests that kuding can be an ingredient in anti-obesity drugs. The authors believe that this effect isn't the result of changes in appetite, but an increase in energy expenditure, which should be a focus for further research.

A research from 2018 in Elsevier, also states that ethanol extract in Kuding can alleviate obesity and high cholesterol.

In 2017, a study published in the Food & Function Journal found that Kuding tea polysaccharides can be beneficial for the liver. In this research, mice with high fructose induced liver damage. When the mice are also fed with kuding, it showed that it can alleviate liver injury and vascular endothelial dysfunction.

In a 2018 study published in Food & Function Journal, mice were induced with a gastric stomach injury. After treating mice with kuding tea polyphenols, the study shows that kuding has preventive effects against stomach injuries.

Besides, kuding’s anti-bacterial properties also makes it a popular and effective herb against acne and bad breath.

This herb can sometimes also help to improve fertility but this will depend on individual conditions. We can make general statements here. You should consult a local Chinese medicine doctor regarding this topic.

How much and when to drink Kuding tea?

The right amount of Kuding that is good for you really divers per individual. People generally start with steeping 2-3 pieces of Kuding needles with hot water during each morning and afternoon. The leaves can be re-brewed and consumed until no flavor is left. If you don't have the right tools such as an infuser mug, then the tea could get bitter. Simply add some more water to reduce the bitterness.

Once certain symptoms are reduced, one can reduce consumption by preparing kuding cha just one time a day (either in the morning or afternoon) for preventive purposes.

This herbal drink is an effective Chinese medicine and in pure form is generally considered safe, but there are a few kuding tea side effects to be considered:

Because kuding is a cooling herb, it should be avoided during pregnancy and during your breast feeding period.

This herb should be avoided when you're very sensitive to caffeine (though it contains caffeine in minimal amounts, which is even less than normal tea).