Black tea
Posted in: How To Make Tea
No comments

Today we’re going to review 2 dian hong black tea samples that we’ve received from a tea growers in Yunnan. If you don’t know yet, ‘dian hong’ is a term mainly used for black teas from the Yunnan province in China. Besides being famous for it’s tea, the province also highly popular for Chinese and foreign tourist. 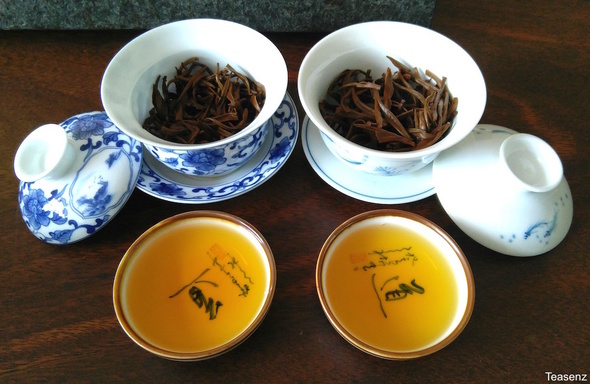 A high grade dian hong consists out of a lot of tea buds and often covered with golden hairs on the surface. Not strange that in the west this tea is also known as a ‘Yunnan Gold’.

Even though, both are black teas from Yunnan, they’re significantly different in appearance. One consists of large fatty buds, while the other appears to be smaller and more curly.

To evaluate and compare both these we’re using a traditional Chinese gaiwan. These tea tools have the shape of a small tea cup with a lid, though they’re mainly used for steeping tea. The benefit of steeping tea in such a cup is that has a large opening, allowing us to better evaluate the leaves and tea color. The gaiwans are made from porcelain, to make sure the material doesn’t affect the flavour of the tea (which can happen with clay teaware). 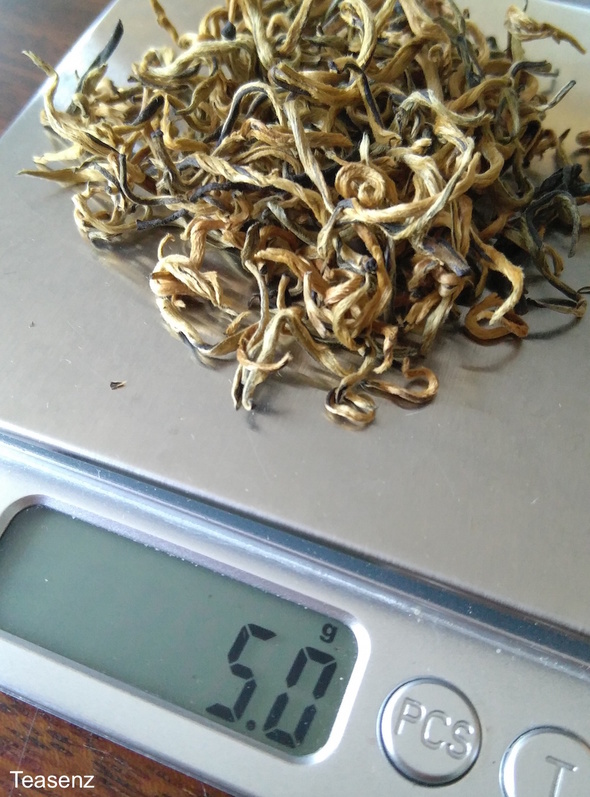 We’ve prepared 5 grams of both teas and steep with water at about 85-90 C (185-195 F). You might wonder, why we don’t steep these teas at max temperature. That certainly won’t be a bad question. The reason is that these black teas are really delicate, and because of this, we believe that we get the best aroma out of them by letting the water cool slightly.

Instead of waiting for the water we cool down, is to pour a small amount of the cooked water in a pitcher to let it cool faster. Then we add it in the gaiwan.

To avoid any bias in our evaluation we’ve used exactly the same amount of tea and applied the same time and temperature for brewing. As said, we’re using also the same tea tool.

Both teas looked really tasty when they were in dry form, and that doesn’t change when they’re being steeped. After straining out the leaves, we can now see that both are made from top grade raw material. The tea leaves mainly consist out of one bud one leaf. Such a quality can only be achieved by handpicking and manual processing. 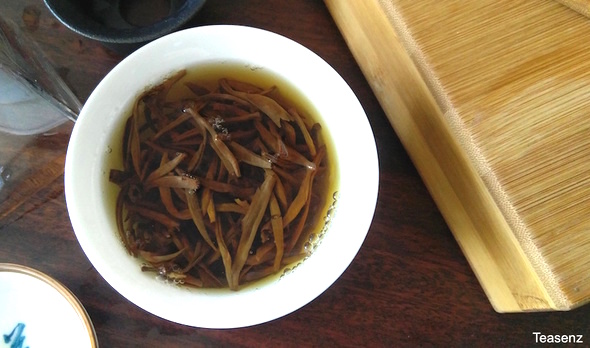 The smaller leaf type has a stronger taste but can sometimes be slightly bitter. It’s still really taste, but we feel it lacks aroma. The larger leaf type dian hong, however, is very fragrant! And it balances really well with smooth taste.

The gaiwan we use is pretty small relative to for example a mug. Because of this, the ‘leaf-to-water’ ratio is high, so that the same leaves can be steeped multiple times. Obviously, the more tea you can extract from the leaves the better. In this aspect, both dian hong blacks are performing really well. We managed to get about 8 steeps out of them. In addition, the flavour was still very bold until the 6th brew and becoming lighter during the 7th and 8th brew.

Based on this evaluation, it’s clear that we’re going to go for the larger leaf Dian Hong as it is available currently on our site! We hope you enjoyed our quick tea appreciation session. Let us know if you’ve any questions.