The store will not work correctly in the case when cookies are disabled.
Anhua Hei Zhuan Brick Tea Tasting
Anhua dark tea
No comments 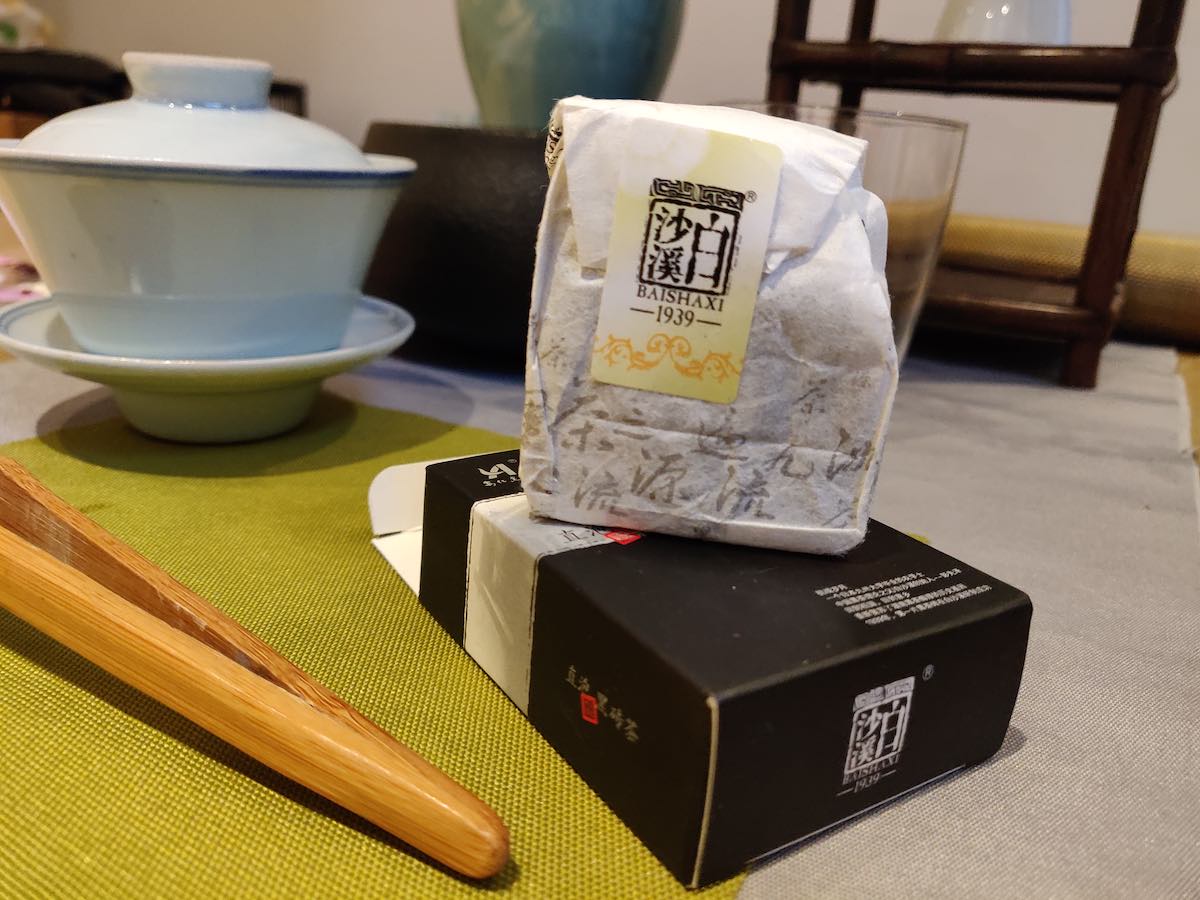 These chunks are by the way very easy to break up. No tea knives required, as you can break them by hand without using much force. 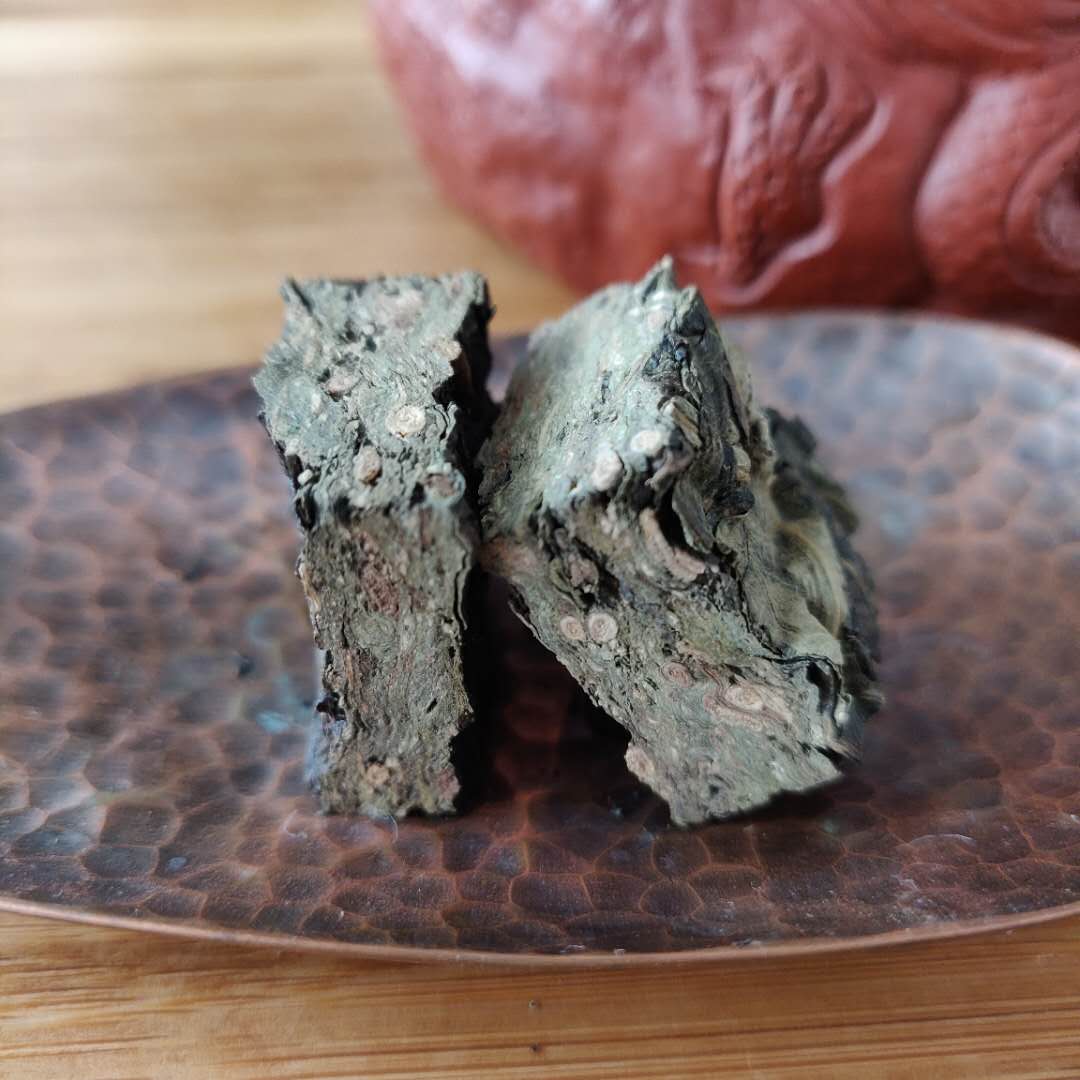 To steep this tea, we're basically following our previously published steeping instructions here: How to brew dark tea. Note that dark tea can also be boiled, but we'll go for brewing in an Yixing teapot. 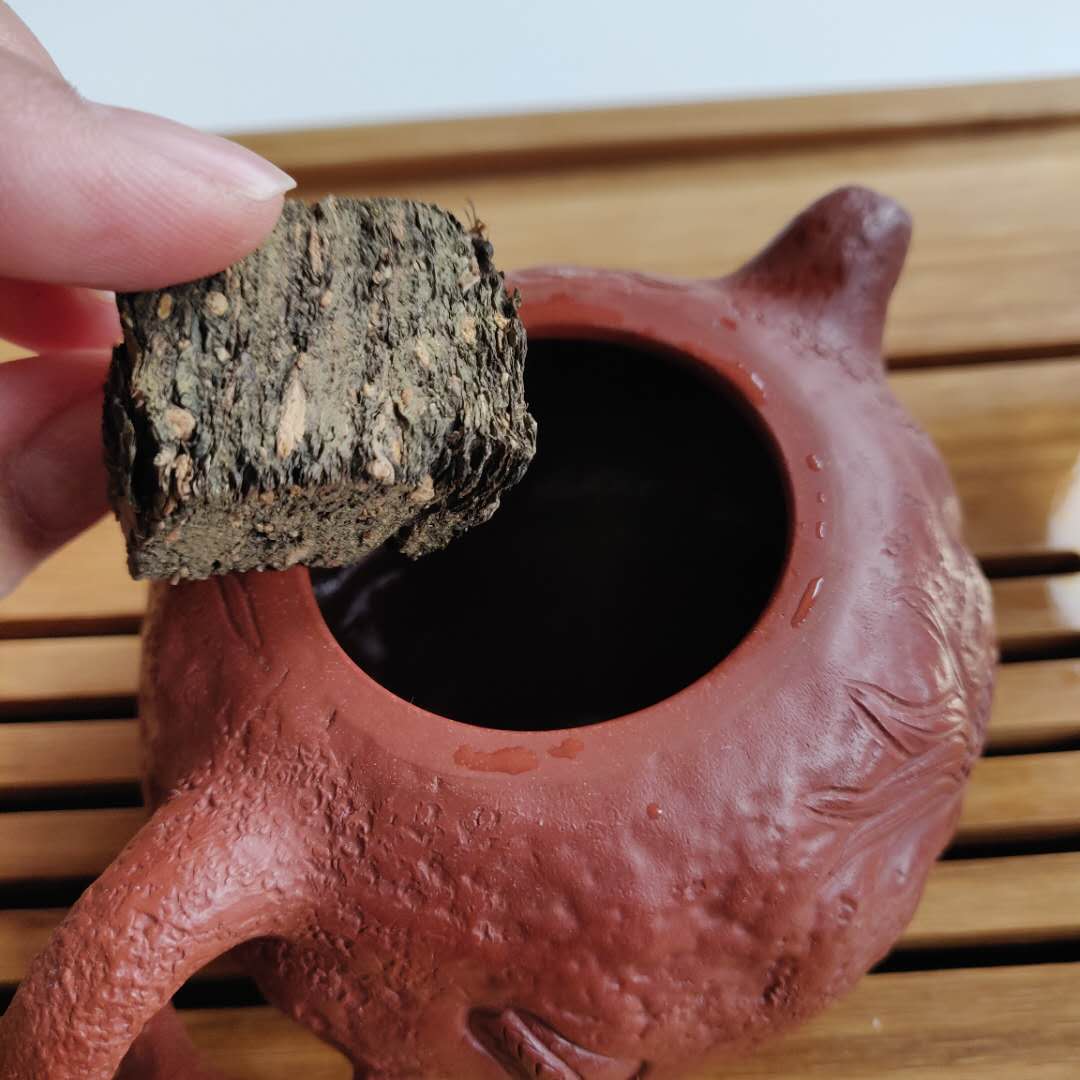 The dry tea looks wonderful with a woody smell, but nothing particularly strong. To wake up and loosen up the leaves, we perform a 30 second rinse. Instead of discarding the rinse, we pour it a pitcher, so that we can use it to isolate the heat of the first brew. 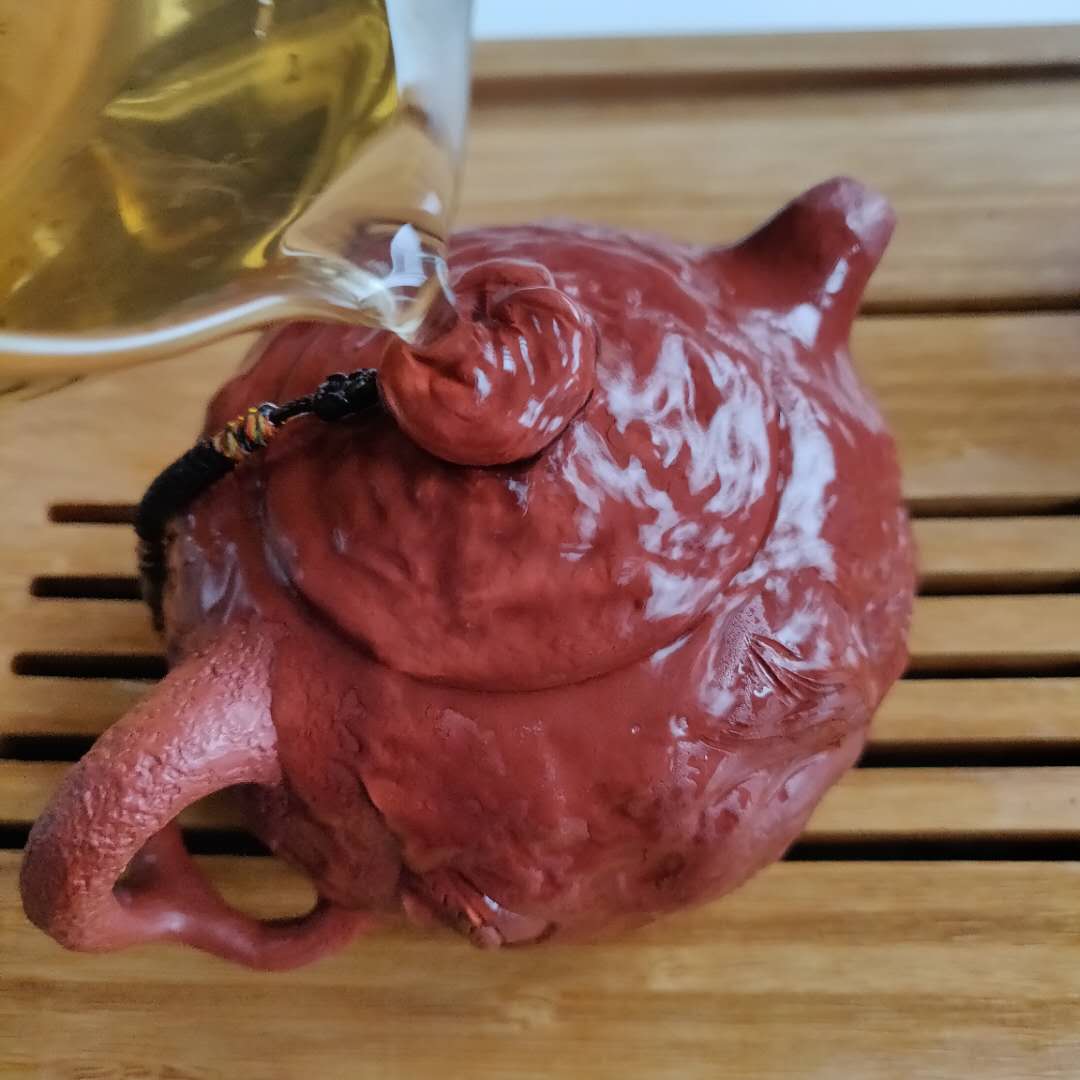 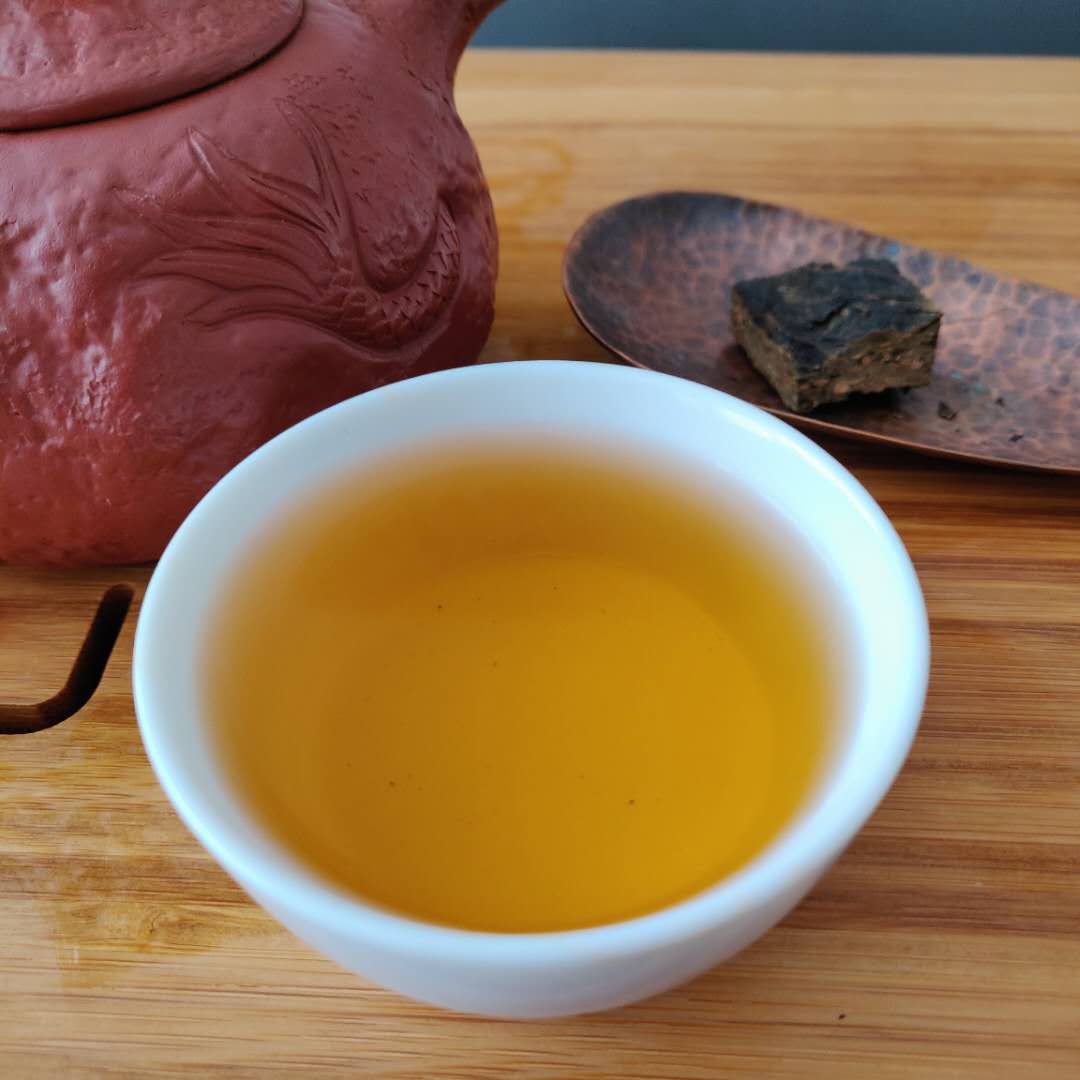 The name 'dark tea' is a bit misleading, as you may expect a very dark broth (like ripe pu erh). This however isn't always the case. As you can see with this tea, the intensity is closer to that of a delicate black tea.

The fourth steep is perhaps the best. The leaves are fully unfurled. The taste of ripe fruits remains while the notes of lemon grass disappear. The taste becomes more herbal & medicinal.

With 4 grams of tea, we are able to brew 6 sessions. During the 5th and 6th session, we've increased the steeping time to 3 and 5 minutes, respectively. That's a pretty good deal as we used a large 300ml Yixing teapot steep about 150-200ml of tea per round.

Compared to Chinese black tea, this Hei Zhuan has a similar level of intensity. Yet, Hei Zhuan bricks should be appreciated for its taste and texture. From the moment you sip all the way to when you swallow the tea, the tea remains so smooth and fruity, and there's this lingering sweet aftertaste. Black teas, however, don't undergo post-fermentation like dark tea, some astringency and bitterness will remain. When enjoying black tea, it's more about the fresh and explosive aroma.

Those who've heard about Anhua dark tea before, will directly think about Fu Zhuan (Fu bricks), which are known for having 'Golden Flowers' (or 'Jin Hua' a kind of probiotic) on the surface.

What makes the traditional Hei Zhuan important, is that its production process is the foundation of producing Fu Zhuan. From this perspective, you can perhaps regard Hei Zhuan similar to Fu Zhuan, but without excessive amounts of Jin Hua.

Also, Fu Zhuans undergo stronger pile fermentation for Jin Hua to grow on the surface. As result, Hei Zhuans generally have more complexity and more variation in flavor throughout the steeps.

Therefore, to fully understand and appreciate Fu Zhuan, one should start by exploring Hei Zhuan first!