The store will not work correctly in the case when cookies are disabled.
Ancient Qin Dynasty History, Facts, Achievements, and Legalism
Posted in: Chinese Tea Culture & History
23 comments

The rise of the Qin is exceptionally important in Chinese history as it managed to end the period of the Warring States and united the Middle Kingdom.

In addition, we want to share China History Podcast' two episodes on the history of Qin (see below in this post). 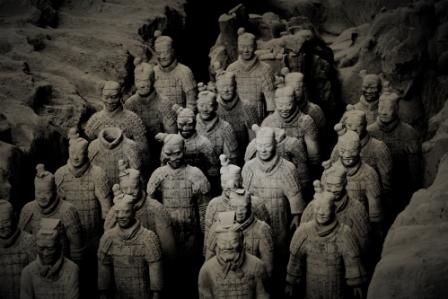 Qin Shi Huang, the first Qin emperor, is without doubt the most well known historical character of China's history. All though the Qin Dynasty didn't last long, he was the first emperor that united China and left an unbelievable heritage.

One well known achievement is the construction of the Great Wall of China. While, the Qin emperor wasn't the first to built a wall, he managed to connect different walls, built by past emperors of different regions, into one giant connected wall.

Tea on the Great Wall

You might wonder why we're blogging about the Qin Dynasty (221 to 206 BC). After all, Teasenz is all about tea, and the fact that tea culture in China wasn't that prosperous until the Tang Dynasty (618–907) doesn't back us up either.

Yet, the unification of the Middle Kingdom, allowed tea culture to flourish in the Tang Dynasty. During the Qin, tea wasn't yet a royal beverage. In fact, it was the wall builders who drank tea to stay energized. As thousands of builders have worked on the wall, this slowly resulted in spreading the word about tea in China.

While builders off the wall faced a lot of hardship and physical challenges, the gigantic project did result in cultural exchange people from different areas of China, continuing the process of unification.

An interesting fact about Qin Shi Huang is that he was obsessed with immortality and sought for the elixir of immortality. This obsession is expressed in the creation of a gigantic city-sized mausoleum protected by a large army of Terracotta warriors.

Even though all the attention goes to Qin Shi Huang and his achievements, it's important to note that there is a great deal of historic events that led to the rise of Qin. Listen to podcast below to discover the key figures, battles fought, and key achievements during the Dynasty was formed.

To make it easier to follow the podcasts, below we've listed the key battles fought that lead to the rise and fall of Qin. These battles were so crucial that they can be considered important events in Chinese history or even world history.

Legalism is often seen as the most important philosophical schools of thought of the Warring States period in ancient China, applied by the key founders of the Qin State, and later the rulers of the Qin Dynasty.

It was Shang Yu, who created the blueprint for Legalism and how to rule a state: the Shang Jun Shu (商君书) or just the Shangzi (商子). It wasn't pretty, but exceptionally effective. The key element of Legalism is that everyone was equal under law, controlled by specific codes, laws and regulations. It was Han Feizi (280 to 236 BCE), who was the man who made Legalism famous.

It is an interesting fact that rulers recognised that not the Aristocrats, but that peasants formed the foundation of the military power. If peasants followed the rules, they would be rewarded. What's controversial about Legalism is that it assumes people to be evil. Society needed a powerful leader that could rule and organise peasants. When they misbehave they need to be punished, and when they contribute to society, they should be rewarded.

See the Qin Dynasty map below. It will be very useful to have this map when reading or listening about the history. 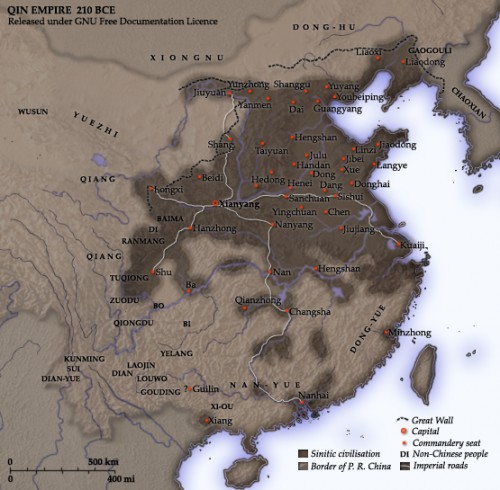 The main achievement of the Qin is the fact that it unified China, creating the first dynasty ruled by the first emperor Qin Shi Huang. Other well-known achievements is the creation of the Great Wall and a large army of Terracotta Warriors.

During the reign of the Qin, unification continued as language was standardised. Due to successful innovations in irrigation technology, the productivity of farming improved, resulting to more prosperity. A large amount of the wealth created, was invested in building the famous Great Wall all across the northern part of China to guard against invasion. For economic integration, the Qin built roads and canals through the unified states, supported with the application of a single currency.

One factor that lead to the great achievements during the Qin, are the inventions during this period. First, the Qin improved bronze swords by using strong iron swords. Second, the crossbow was developed during the 5th century BC. These were significantly more accurate and powerful when compared to the traditional composite bows. One other important feature is that it could be made ineffective by just removing two pins. This could prevent enemies from taking advantage of a crossbow. 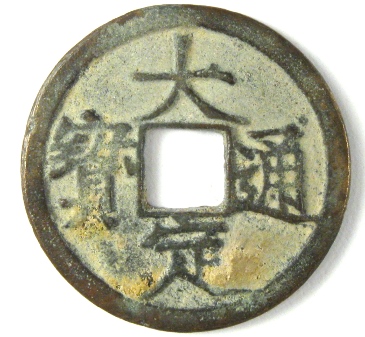 Until the rule of the Qin, different types of currencies were used in different regions. The history of Chinese currency spans to over 3000 years. Moreover, in the Stone Age (up to 4500 years ago), it was actually already believed that the Chinese used Cowrie shells as an earliest form of exchange method. It wasn't until 210 BC when the Qin emperor eliminated all forms of regional currencies and put in place the copper coins (with a square hole in the middle). Even though, paper money was already invented in China in the 9th century, these copper coins remained in use all the way till the 19th century, until it was replaced by the Chinese yuan.

When it comes to education, that's not a topic that the Qin emperor was fond of. The first emperor of Qin practiced total censorship. Scholars were punished if the refused to hand in books, which then were destroyed. Books and knowledge was seen as useless, unless it's about medicinal practice or farming.

Censorship: An interesting fact is that the Qin practiced total censorship. He persecuted scholars and destroyed books. He defined useless books as any book about anything except books about topics like medicine and agriculture. There was no place for topics such as art and literature like there was later on during the Tang Dynasty. Qin Huang Di his advisors' way of thinking was that if people spend more time studying, they would have less time to grow food for the masses. One notable historical fact is that hundreds scholars that refused to turn in their books where buried alive. Later on, as their was more pressure on expanding the Great Wall, they were send to the building grounds to work until they die.

Also read about the full The History of Tea 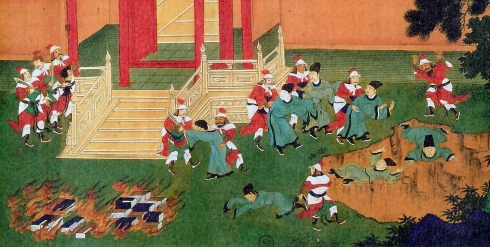 Above: painting showing burning of books and burying scholars during the Qin Dynasty. 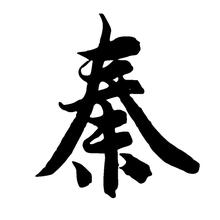 How to write Qin in Chinese?

The Chinese character for Qin is 秦. Qin Dynasty is written like 秦朝.

What is the Qin Dynasty?

A dynasty is defined as a line hereditary rulers of a country. The Qin state was the first to unite China, and thus create the first Dynasty.

When was the Qin Dynasty?

Who was the first emperor of Qin?

The first emperor of Qin is to Qin Shi Huang and lived from 260 to 210 BC. His real name is Ying Zheng.

What was the religion during the Qin dynasty?

During this Dynasty people believed in several gods/spirits.

August 18, 2015
Comments
nathen
can you do something on Quin inventions
Reply
Teasenz
Do you mean qin dynasty?
Reply
Natalia Delgado
no, I think this is only on Qin, not the entire dynasty.
Reply
tina
its a dynasty about 300years before (crist)
Reply
Teasenz
Do you mean qin dynasty?
Reply
sqhd
yes
Reply
Teasenz
Yes, sure. This article will be updated soon.
Reply
trix
they have a paragraph on that :)
Reply
Calvin White
i need to know about the main religion of the qin dynasty
Reply
natalie tan
i'm quite sure it's confucianism
Reply
Jhonn
Confucianism was a philosophy as well as legalism but legalism principles were used to maintain control
Reply
Teasenz
There was not yet any main religions on the rise during that period. It was really the early days, so people believed in a wide range of different spirits and gods.
Reply
Gabriel
Do you have a positive view on Qin Shi Huangdi?
Reply
Teasenz
This article with a neutral view. If you've any ideas or thoughts feel free to share!
Reply
Sορηια Sτοcκεr
Does anyone know what it would have been like for what was Ancient Chinese Society like under Qin Shi Huang?
Reply
Teasenz
Your question is a very broad. Could you be more specific?
Reply
Cristiao ᶏlas
Is there a particular author or can I reference Teasenz as a whole?
Reply
Teasenz
Feel free to use 'Teasenz' as the author of this article.
Reply
Imi
restricted, yet safe.
Reply
Josh Parker
when was this "Teasenz" founded or created and who is the author and when was the date retrieved and what Is the URL. thank you.
Reply
Teasenz
This article was written by Lisa Lin, and published on August 18, 2015.
Reply
Hannah Elliott
What was the government in the Qin Dynasty
Reply
Teasenz
It was the Qin dynasty themselves with an emperor on top and government officials below him.
Reply
Search The Blog
Categories
Recent Posts
Tags
Anhua dark tea Black tea Chrysanthemum tea Dan cong tea Free tea giveaways Gaiwan Green tea Kombucha Liu bao tea Oolong tea Osmanthus Pu erh tea Tea history Tea recipe Tea sayings Tea storage Tea stories Tea taste White tea Wuyishan Yixing teapots
Search The Blog